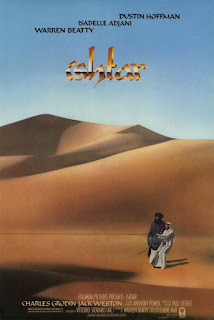 Remember last month when I told you about a new series on my blog called Famous Flops, which would find me watching one epic flop per month that I hadn't previously seen? And that I announced Ishtar as my first movie for February?

When I announced Ishtar as the first movie in the series, I did so without having a clear path for seeing it. I assumed it would be available on Netflix, though I don't know why I would assume such a thing -- the Netflix inventory is notoriously full of holes, some of them a lot bigger than this one. In the comments section of that post, Don Handsome pointed out that Netflix did not in fact carry Ishtar.

But I didn't have to scramble for an alternate viewing method for long, because the helpful website www.canistream.it revealed to me that I could in fact watch Ishtar on Crackle. I had never used Crackle and was a bit skeptical of its validity as a resource, but I soon learned that the only price to pay for this free service is having to sit through commercials. Plan back on.

Then I checked Can I Stream It? again and found that either its apparent availability had been an optical illusion, or just like that it had slipped out of availability again. The website did inform me that the movie was available for purchase from Amazon for $14.70, but that exceeds my budget for something like this.

So the apparently epic awfulness of Ishtar will remain a mystery to me for an undetermined amount longer, and instead I'll be launching the series in March with The Adventures of Pluto Nash. A movie that is indeed among Netflix's offerings.

Will you join me? If not, I can hardly blame you. It'll be an adventure indeed, I'm sure.
Posted by Derek Armstrong at 2:30 AM