How to haplessly catch a shark, and other Jaws thoughts 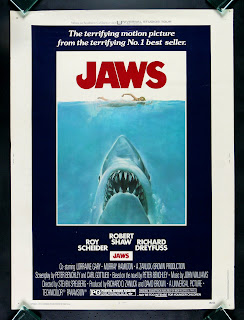 While New England is being blanketed by snow and even Southern California is experiencing weather that is cold, windy and rainy, what better way to get warm than to transport yourself to the summer of 1975?

That's what we did on Friday night when we watched Jaws, me for only the second time, and the first time in 17 or 18 years I imagine. We still had to bundle up while we watched it, since I borrowed a projector from work and we projected it on the inside of our garage door. We sat on our old couch under blankets, trying to keep our toesies from getting cold.

When you watch a classic that you haven't watched since you were in your early 20s, and you're now in your late 30s, you are bound to have plenty of new observations. I'll repeat what I said in my Dumb and Dumber piece the other day: Just because you see some funny parts that don't quite add up, doesn't mean you love the movie any less.

The first new observation I want to tell you about is the scene where the townspeople come after the shark with torches and pitchforks.

May as well have, anyway.

You know what I'm talking about. It's the scene where the citizens of Amity are mad as hell and they aren't going to take it anymore. They take to the harbor en masse to recklessly board boats, regardless of the boats' maximum occupancy levels or the citizens' ability to pilot them, carrying spears, sticks of dynamite, and whatever rusty implements they found in their garage, ready to have shark meat that night for dinner.

I haven't seen a more unintentionally funny scene in a long time. This motley collection of blowhards, drunkards and other rubes have about a snowball's chance in hell of knowing what to do with this shark if they came across it. They'd as likely start punching it and insulting its mother as penetrating its weak spots.

They get out in the water and steer these ships so haphazardly that people are practically falling out of the boats and the boats are practically colliding with each other. One guy starts randomly throwing M-80s in the water. Two other guys dump chum with such gusto that they nearly overbalance themselves overboard. I think I even saw one guy with a lasso.

Yet they actually do capture and kill a shark.

When were video games invented again?

After the town of Amity gains fame for both having a shark and then subsequently killing it, the incident becomes a major advertising thrust for the tourism-conscious town. They're selling all sorts of shark souvenirs and the like.

And for some reason, the local video arcade has a game where you shoot up sharks with a machine gun.

As I was watching this scene, I wondered if Pong had even been invented yet in 1975.

It turns out it had, but only three years earlier. So 1975 was very, very early in the history of video games. Yet here's this odd first-person shooter game in which you riddle a shark with bullets.

Was the movie engaging in a little Jules Verne-style forward thinking, or did some similar games actually exist back then?

"Sure, what the hell, play by the water"

Correct me if I'm wrong, but hadn't three people died already when the shark makes his appearance in the so-called "pond" on the 4th of July? My understanding of "the pond" being a place that's enclosed by netting and buoys and is therefore considered safer. But it's still in the water, people.

And Sheriff Martin Brody still lets his son play there. And doesn't even start moving that much faster when his wife tells him the boy is there. (Okay, maybe it was his wife who let their son play there. Come on, Mrs. Brody: Stand by your man.)

Isn't there a moment on the boat when she calls for him on the shipboard phone, yet we don't hear any of their conversation or even see him take the call? What was the plot function of that call?

And when he leaves on what may be a suicide mission to get the shark, meaning they may not ever see each other again, all they can do is manage a rather awkward hug?

In the 4th of July scene where bathers practically stampede out of the water (one heartless man even overturns two kids on an inflatable raft so he can paddle it in himself), most of the swimmers are singularly devoted to getting out of the water as soon as possible. Then there are a couple shots of poorly directed extras who stop to essentially look at the camera and shriek.

One woman in particular lets out a cry right out of a soap opera as she hugs her child to her. She doesn't move. Yeah, sharks are attracted to the splashing, but there's no way this woman is making that choice consciously in this situation, especially with a child to protect.

Did Quint really need to smash that radio?

Not that fake after all

It's almost a given that one of the "complaints" about Jaws is that the shark looks fake. People who love the movie tend not to tolerate that criticism without qualification. They can spin this into a positive, since the story also goes that a technical malfunction kept them from using the shark as much as they wanted to -- making for an accidental case of brilliant minimalism.

But I have to say, I wasn't at all bothered by its artificiality. In fact, only once in the whole movie did I find it the least distracting (the scene where it eats the back of the boat, flailing about on the deck).

So I'm essentially saying that 1975 FX are good enough for me. Forget all this Avatar stuff. Give me a robotic shark any day of the week.

Robert Shaw is so damn good in this movie. Roy Scheider and Richard Dreyfuss are great, but Shaw is a notch better, a notch more legendary.

In fact, he gets to deliver the movie's two best speeches with the perfect dose of macho New England crustiness. One speech is so great that it even gets its own name: "The U.S.S. Indianapolis speech."

Good on ya, screenwriter and novelist Peter Benchley.

One of the lovelist shots in the whole movie is the carcass of the shark sinking to shallow ocean floor, its dorsal fin fading into a murky red cloud and then out of view.

I hadn't seen Jaws in many years, but I had recently been put in a very public position to render judgment on it.

And the judgment I rendered was oh so questionable.

I guested on a film podcast called Flick Fights just about two years ago, the format of which calls for the hosts to debate the merits of two films that come up in a head-to-head duel randomly determined by the Flickchart website. Wash, rinse, repeat.

Early on we got a duel between Forgetting Sarah Marshall and Jaws, and I think you know what I'm going to say here.

Yes, I argued that Sarah Marshall hit my sweet spot more than Jaws did. Yes, I was nearly laughed out of the building by the two hosts. And yes, I redeemed myself through a series of solid judgments from there onward.

But one of the reasons I was eager to see Jaws again was to determine if that funny and highly charming comedy was actually better than the movie that launched the summer blockbuster era.

You know, they scratch such different itches.

I do think that if I were on that podcast tomorrow, having seen Jaws yesterday rather than 15 years earlier, I would have picked Jaws this time.

Updating my various lists (I have three different places I mark seeing a film for the second time), I noticed that my records show that I gave Jaws a thumbs down.

Clearly this was a mistake. I remember being absolutely enthralled the first time I saw it. Clearly I was off one row in my Excel spreadsheet when that "down" was recorded.

Glad I caught it before any more time could pass. If anyone should ever stumble across this list or see at my invitation, just imagine if they thought that I actually disliked Jaws.

The embarrassment.
Posted by Derek Armstrong at 2:16 AM

Watching Jaws on an annual basis as I do I think you tend to find new things every time. So I'm not sure that your discoveries on your second viewing (are you kidding me????) are due to the fact that you haven't seen this film in 29 years. Jaws gets couched as the first designed blockbuster. Maybe that's true, but I think that assumption really ignores the fact that this film is a deep tapestry of character (and yeah there are some bad extra scenes) moments that give us a real understanding of where everyone is coming from. As a result, I would argue that the only falsehood in the movie is the fact we are expected to believe that the same shark would repeatedly attack the same beach over and over again.

I am glad to know that you've rectified your lack of Jaws. I recommend that you watch it again this Memorial Day. This is Jaws' natural habitat (california or not) and As a result i tey to wTch it at the beginning of every summer. That tradition is one that I hope I never let go.

Also. He may have lost his sense of humor, but lets give Past Spielberg some credit: the harbor scene is absolutely intentionally humorous.

I think that's probably correct. The reason it struck me as careless rather than intentional is that the ordinary cinematic morality would be to punish anyone who doesn't properly fear nature. Yet none of the victims in this movie actually taunt the shark, while the ones that sort of do (the two guys who go out at night, the rube townspeople) seem to get away with it. Pretty shrewd reversal.

I'd never seen Jaws until a friend of mine was so annoyed at that fact that he got me the 25th Anniversary DVD as a birthday gift. It's solid, I respect and enjoy it but I don't worship at its altar the way a lot of fans do.

I definitely agree with you about Robert Shaw's performance. For my money, he's the element that elevates the whole film to "masterpiece" status. We believe this is the guy who can succeed in catching the shark, particularly after seeing how inept the zealous morons of Amity really are.

My friend who gave me the DVD caught a screening of Jaws a few years ago and told me afterwards that he thinks Spielberg may have actually peaked with that film. If not for 1993, I could entertain that argument, but Jurassic Park and Schindler's List - back-to-back, no less - keep me from buying it.