Netflix: Breaking the spell cast by good movies since 2013 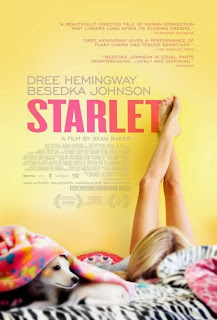 I'm not sure exactly when Netflix started offering you something else to watch the second the credits of your current movie start rolling, but I started noticing it back in February or March.

Well, I've had about enough of it.

On Saturday night my wife and I watched the 2012 indie Starlet, which my pal and fellow film blogger Nick Prigge of Cinema Romantico ranked among the top ten films he saw last year. That endorsement alone lodged the title in my memory, even though it wasn't widely available last year, and Nick may have actually seen it at a film festival, if memory serves. (Actually, Wikipedia lists its release date as November 9, 2012, without any elaboration, so it must have just been a very limited release.)

Anyway, it became available for streaming on Netflix at some point in the last couple months, and I added it to our queue. My wife heard or read something about it this past week, so she suggested it as our Saturday night viewing. I wanted to see what this movie on which Mr. Prigge expended so much praise was all about.

Well, Nick was right. It was great, and it has one of those perfect endings that leaves you in a dreamy spell, lost in the final moments that have just transpired.

No sooner had I entered this dreamy spell than Netflix rudely threw Starlet up into the upper left hand corner, abruptly filling the rest of the screen with this crass image:


Instead of contemplating the poignant and transcendent final scene of this thoughtful movie, I was now confronted by some dumb, lame American Pie ripoff.

Oh, I know why Netflix presented me with My Awkward Sexual Adventure. Without spoiling Starlet, which deserves to have its narrative revelations presented exactly according to the chosen pacing of writer-director Sean Baker, and no sooner, I'll say that Starlet presumably shares sexual themes with this movie in which a man apparently fucks a cantaloupe. But I'll venture that's all they share.

Because Netflix is so eager to algorithm me to death, I had to jump up and click back on the screen to maximize Starlet, rather than just sitting there in the pleased stupor of a film accomplishing all its narrative goals, and leaving me grateful for having watched it.

After all, for all I knew, My Awkward Sexual Adventure might start playing even before Starlet could finish its credits.

This has been an awkward programming venture by Netflix, and it needs to stop.
Posted by Derek Armstrong at 8:14 AM

And so yeah, I can totally understand that frustration of Netflix taking the moment to advertise. As someone who takes movies too seriously, I feel like throwing in ads while the movie is still technically in progress is invading a sacred space. Before, After, okay, I get it. But during? C'mon.

I suppose there are precedents in U.S. television. I've seen extreme examples where there's a split screen divided between the end of one show (playing over some very hasty credits) and the beginning of the next show. It's even more absurd when it's back-to-back episodes of the same show.

Anonymous said...
This comment has been removed by a blog administrator.
February 1, 2014 at 8:43 PM