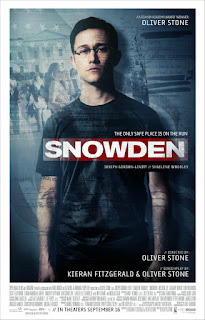 There's nothing that makes you feel more like a critic than the E word: embargo.

And then, there's nothing that takes that feeling away more than having to sign someone else's name to get into the theater.

The advanced screening I attended of Oliver Stone's Snowden last night was probably the furthest ahead of the release of any screening I've ever attended in my capacity as a critic. It's pretty much exactly a month until the film hits theaters here in Australia -- a week before that in the U.S. -- and our reviews cannot be published until September 12th.

I think it's the first time I've been conscious of an embargo on a movie I was planning to review. I'll probably write the review today, as I want to write it while it's still fresh in my memory. That probably goes without saying. But I'll take the additional step of not even sending it to my editor until the embargo is about to lift. It's not that I don't trust him not to accidentally publish it early, but ... well, I don't totally trust him not to accidentally publish it early. Anyway, he can't publish something he doesn't have.

Unfortunately, there's already one rule I'm not following as I had to perpetrate a fraud just to get into the theater.

As the invitation of course came in his name, my editor signed himself up as the person attending the screening. He may even have initially planned to be the one going. Ultimately he had a conflict, so he offered it to me ... but never told them he was changing the attendee. They would have surely been fine with that, but once he didn't change it, I had to do what I always do in situations like this -- I had to give his name. Which is usually fine, but felt a bit fraught with danger especially with the E word floating around.

And especially when I saw that we were signing in as ourselves.

Not producing IDs, I was glad to see. That certainly would have been a plausible security measure for them to take. In fact, the security was almost lax in some respects, as they never even checked the printed tickets I had. Perhaps they figured that those are a bit fallible, as anyone can print out a ticket that arrived via email. (Which of course doesn't stop this from being a major part of how people get in to events.)

So I found my editor's name on the list and quickly scribbled a signature, knowing that when signing your name as somebody else, speed is more important that legibility.

Speed and confidence. I knew the way to be most confident about signing was to actually sign the name, even if a doctor's scribble would have had the benefit of ambiguity. If you're signing as a doctor would, though, you have to instinctively know how that looks. You have to know which part of the signature is a whip and which part a squiggle, and I don't think you can do that when someone's watching you without worrying about second guessing yourself halfway through. Easier just to sign the actual name, which I did, though I feel like it looked a bit like a child's signature because I could not sign an unfamiliar name quickly without making mistakes. Then again, just because you're an adult doesn't mean you don't have messy handwriting.

Essentially, I was assuming an identity to get in to a movie about spies.

Anyway, it wasn't an issue. The only way it might become one is if the site publishes the review before the embargo lifts, which makes it even more important that I keep it close to the vest until the 12th of September.

It was funny having a film about government secrets be shrouded in secrecy. I felt like I had become an extended wing of the intelligence agency, as having watched Snowden possessed me of a knowledge that I must safeguard. The more Snowden thing for me to do would be to break the embargo and share my feelings on the film with a public that has the right to know.

But true to the embargo, I won't tell you a thing about my feelings about Oliver Stone's movie.

I will tell you that the movie I saw afterward, Sausage Party, made a funny contrast. The CIA and the NSA are both full of men, so it was like going from a sausagefest to a Sausage Party.
Posted by Derek Armstrong at 9:42 AM