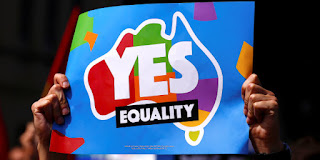 It was a good day in Australia yesterday.

Although marriage equality was not passed, the results of a non-binding postal vote were indeed read. And that vote told the politicians, who would actually have the power to legalize gay marriage in Australia, that the citizens themselves are not opposed to the idea.

Sixty-one percent of those who responded to the vote, in fact, felt this way. After Brexit and Trump, someone finally stuck it to the right wing.

Having missed various landmark moments in the U.S. fight to legalize gay marriage, I've decided to use this symbolic moment instead to post my top five gay romances in film.

Unfortunately, given the traditionally straight-leaning tendencies of cinematic history and my own viewing patterns -- there's plenty of queer cinema out there, but I only actively seek out the most prominent examples -- some of my choices may seem like fairly flimsy examples of compelling gay relationships. Either they are not central to the movie, or they are not the first thing you notice about that particular movie. And there may be some obvious examples I am excluding, either because I thought they were too obvious or because they just don't happen to hit my personal sweet spot. (Much as I like it, Brokeback Mountain is kind of an example of both.)

But this is what I've chosen, and I hope some of these qualify as personal sweet spots for you as well.

Listed alphabetically by title of the movie:

I had occasion to praise this film only a few weeks back on this blog when I revisited it for the first time in a decade. It was my most obvious candidate for this list, as it tells the story of lesbian-in-denial Megan (Natasha Lyonne) and lesbian-in-full-flower Graham (Clea Duvall), who discover their love for each other at a camp intended to cure them of their homosexuality. Not only is the development of their relationships sweet and disarmingly free from cynicism, but it culminates (spoiler alert!) in my favorite homosexual variation on that scene at the end of most romances where the guy completes a grand gesture in order to win the girl back. As it turns out, a girl and a girl can do this too.

This mockumentary about a reality show in which people compete to stage the most original themed wedding would seem to focus on the three heterosexual couples competing on the show. But at the true center of the film is the two men helping plan all three weddings, who are also romantic partners. Vincent Franklin and Jason Watkins each play the character Christopher Guest would have played if he'd made this movie, but roles that seem to have been written as comic relief take on real heft as the film becomes sneakily emotional. As the two wedding planners succumb to stress and the emotional toll of the task they're involved in, the strength of their own relationship is emphasized amid the revelation that the others in question don't have nearly their solid foundation.

My second straight choice in which the gay couple is tellingly looking in from the outside on multiple weddings. Only after Gareth (Simon Callow) has died at one of these weddings do the characters in his social group, who had previously thought themselves all hopelessly single, acknowledge that Gareth and Matthew (John Hannah) were for all intents and purposes married. They modestly yield the spotlight to others, but when it's time to honor his passed partner, Matthew takes the moment and delivers one of the most heartfelt and memorable poetic eulogies in film. It's because I love this movie so much that I can nearly recite W.H. Auden's "Funeral Blues."

Ben (Alfred Molina) and George (John Lithgow) are the one couple on my list who do get to marry -- and it ruins them. The pictures of his wedding on social media cause Ben to lose his teaching job at an uptight private school, which had been keeping the couple afloat in their expensive New York apartment. Once they must sell and look for other arrangements, they are forced apart by the prejudices of society and the realities of finance, though their love and affection for one another never wavers. Theirs is a mature love that insists on focusing on the positive and proceeding forward without regret, as these two old souls seem to exchange glances that say, unmistakably, "This is the way the world goes."

We don't get to see Andy Beckett (Tom Hanks) and his lover Miguel (Antonio Banderas) together all that often in this movie, as the focus of the movie is (rightly) Andy's legal battle to retain his job and his relationship with the lawyer (Denzel Washington) he hires to represent him. But their few scenes together are powerhouses, demonstrating the type of unconditional love of which most straight couples could only dream. Even though it was Andy cheating on Miguel that infected him with AIDS, and that that infidelity could have even infected Miguel with the virus, Miguel is fiercely loyal toward his lover and at his bedside, literally and figuratively, during every stage of his decline. If they don't have the "in sickness and in health" part of marriage down, I don't know who does.

I felt bad having only one female couple on here, but Jessica couldn't quite crack my top five for the slight problem that its title character is really a heterosexual experimenting with homosexuality. But I love this movie and the relationship between these characters is sweet and honest.

Got to get a straight (to use the word loosely) comedy on here. You wouldn't at first think this movie contains the most forward portrayal of a gay relationship, but there's something so easy and comfortable about the relationship of the two buttoned-up ATF agents who join the wacky road trip at the center of this movie.

As gay marriage moves closer to being the law of the land everywhere in the world -- though it may take some countries another century to get there -- I hope that searching my list of favorite films won't produce so relatively few contenders for a list like this. But it stands to reason that the more it's accepted, the more we'll see more movies featuring both central and side gay relationships ... as many as possible of which will end in marriage.
Posted by Derek Armstrong at 1:20 AM