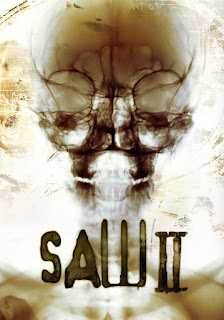 I've been ranking the new releases I see each year for 22 years now, from first to worst. Never before Wednesday night had I had the pleasure of revisiting a movie I'd ranked last.

However, having given a second viewing to the film that claimed that ignominious honor in 2005, I now wonder if more of them might be worth seeking out.

Saw II was always a strange choice for the movie I ranked 73rd of 73 in 2005, in part because it had at least one very good thing about it. Namely, its opening is one of the most effective contained horror scenes I've ever seen.

So imagine how bad I must have thought the rest of the movie was.

If you don't recall that opening scene, the poster I've chosen may job your memory. The movie opens on a guy trapped in one of Jigsaw's traps, which had not yet become old hat in only the second movie. Around his head is clamped a nasty device that Jigsaw likens to a venus fly trap, kind of like an iron maiden for the head. It'll snap shut if the guy doesn't cut out the key from where it's been surgically implanted behind his eye. He has a knife to use, but he has only one minute to do it. Things turn out pretty much as you might expect.

That scene floored me for its use of tension, time, and the hopelessness of doing yourself severe bodily harm to save your own life under those conditions.

The rest of the movie, apparently, erased any memory I had of it.

But I'd wanted to see that opening again for ages. In fact, within the past year, I went looking for Saw II on my various streaming services for just that reason. But I came up empty.

Imagine my surprise, then, went I did a deep dive into my My List on Netflix Wednesday night and found it sitting there.

I had intended to watch only that opening, but then I decided to leave the rest on in the background. I had some work I needed to do, some emails I needed to send, and I could at least give half my attention to what was going on.

And this time, I liked the whole movie.

In fact, I sat there wondering if something would strike me as howlingly funny or awful about it, the kind of reaction you usually have when you decide to send a movie all the way to the bottom of your year-end rankings. It never happened.

In the sequel, I didn't like the idea of a half-dozen people trying to make their way through a house as they go through a series of grueling tests. I also don't think I liked the tests themselves. Once the plot proper started rolling, I got off the ship quick.

But I think Saw II benefits from the existence of so many subsequent Saw movies, some of which are half-decent but most of which offer very diminishing returns. I've seen them all, including the most recent last year, which should tell me how much the series got under my skin, so to speak. And Saw II was definitely a part of that.

This time I cherished the twists and found the individual tests much more interesting. It wasn't just the guy with the mouse trap about to mash his head. It was all of it. There's some damn clever stuff in this movie.

So what was wrong with me when I first saw this movie? I mean, it's not a masterpiece, but worst of the year? It makes me wonder how many other judgments I've made over the years that just plain weren't supported by the movie in question. I mean, maybe The Emoji Movie is actually bad.

I don't expect my reconsideration of Saw II to kick off a whole series of checking back in on bottom-ranked films, but hey, it could. I've already got my year-long viewing series set for 2019, but 2020 is still up for grabs.

Another reason I might have reconsidered this before now is that its director, Darren Lynn Bousman, made a movie I kind of love a few years later called Repo! The Genetic Opera. That's not a popular opinion -- that movie undoubtedly made the bottom end of people's rankings in 2008. But I was really taken with it, and remember thinking "This is the guy who directed Saw II? Wow." Maybe it wasn't the leap forward in quality I thought it was -- not because Repo wasn't of higher quality, as many people might think, but because the leap from Saw II was a lot smaller than I thought it was. (Bousman also directed Saw III and Saw IV before then, but I digress.)

At the very least I feel like I'm correcting a wrong that never should have been done to Saw II if only because of the strength of that opening scene. If a great movie is four great scenes and no bad ones, or whatever the quotation is, then a movie with one great scene and lots of bad one has got to be at least mediocre. And the thing is, I don't even know exactly which scenes that bad ones were supposed to be.

Hey, I can be wrong. Anyone with opinions can. Our fallibility just makes us more interesting.

Though if I ever find myself reconsidering the merits of my worst of 2017, Sean Penn's The Last Face, I will become pretty concerned about my critical faculties.
Posted by Derek Armstrong at 12:01 AM