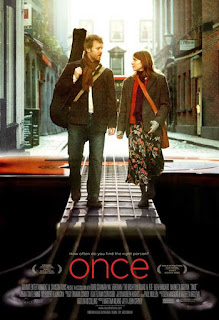 There are many different days on the calendar that strike me as ripe for a themed viewing. I usually can't let Valentine's Day pass without some sort of romantic movie, and Halloween is the occasion for a whole month of themed viewings. Rarely does Christmas come and go without at least one Christmas movie, usually more.

I'd never even thought of doing that on St. Patrick's Day. If you consult my handy dandy list of movies watched on particular days of the calendar -- you would have to know I have this -- March 17th yields the following:

So I'm not particularly likely to watch anything on March 17th, as I once had a nine-year drought on that day since I started keeping track of this sort of thing back in 2002.

Now, that list doesn't capture rewatches, but here I come up empty as well in terms of thematic viewings. Since I started keeping track of that in 2006, I show only Full Metal Jacket back in 2015.

For some reason, 2018 was different. Maybe it was St. Patrick's Day falling on a Saturday, which enabled me to wear my Boston Celtics t-shirt all day. (If it had been on a weekday, that wouldn't have been work appropriate.) But yeah, I decided I was going to watch something Irish-themed that night. It may be the start of a new tradition.

My wife laughed at the phrase "Irish-themed," because she thought "Irish" would just be better. But there was a logic behind my phrasing. The first movie I'd thought of was The Departed, which I own but have not watched "in yonks," to use the Australian slang. You would not call this movie Irish, but you would call it "Irish-themed."

But The Departed is like four hours long (2:30), and I knew that was doomed when my dad and his wife stayed for an hour after dinner to play Rummikub with us. After I dropped them off I had to go pick up my bike from where I had locked it and left it earlier in the day. A 90-minute movie was much more viable.

The last time I watched this, I remember thinking that it's such a slight little movie that I couldn't believe it had been in line to be my #1 of the year before There Will Be Blood came along. The music by Glen Hansard and Marketa Irglova was as good as ever, I thought, but was the movie much of anything without it? And then by the end, I remembered that indeed, it's so full of delightful moments and an overall delirious vibe of romance and artistic expression that duh, it's great and I should never have doubted it. I went through basically the same perceptual arc this time as well.

I don't want to give you any detailed reactions, but I will say it felt nice and right to be in Ireland on this day. I'm not Irish (or not very much, anyway), but I do always enjoy recognizing the holiday by at least wearing green. Each year I have the ambition to get green food coloring and color my beer, though I rarely do it. Did have one beer last night though.

And though the holiday doesn't really mean anything to me, I'm from Boston, a city of Irish, and March 17th does give me kind of a warm feeling of Irish love. Glad to spend it with some true Irish folk, deciphering accents and walking the lived-in streets of Dublin.

Now, to figure out if I plan to set up a themed Easter viewing. Watership Down, maybe?
Posted by Derek Armstrong at 8:09 AM