The day my kids sat still 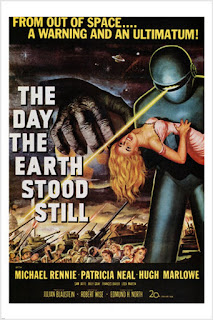 The reason we're in the U.S. is to celebrate my dad's 80th birthday, which will not actually be until September 10th, but this was the best time for my sister to take off from work. She and my mom flew out to Fresno from Boston on Monday, and my dad and his wife flew out from Maine to LA mid-week last week. We got in on Saturday morning, saw them for a swim in our hotel pool on Sunday, and caravaned up here on Monday, where my sister and mom actually beat us here. "Here" is Yosemite National Park, or just outside of it anyway. (And yes, my family has gatherings such as this even though my dad and mom split up in 1997. They've had almost every Christmas together since then.)

Yesterday was the day we celebrated Dad's birthday with a french toast breakfast and presents. I had a surprise for a movie night that night: The Day the Earth Stood Still. Not the abominable Scott Derrickson-Keanu Reeves remake from a couple years ago, but Robert Wise's 1951 original, which was my dad's favorite movie when he was growing up (from age 12 onward, anyway. His favorite "adult movie" is The Seventh Seal).

Dad was indeed "chuffed" (to use the Australian term) at the idea, and told us the reason it had become his favorite, which I never knew previously. He had a friend who was in some way associated with the local movie house (he told us this story yesterday and I've already forgotten the nature of that association), and when The Day the Earth Stood Still left town, my dad came into possession of a number of the still images from the movie they had used to promote it, which he proceeded to festoon around his room.

The impetus for this viewing was not just to fete my dad on his "birthday," but to create a bonding experience with him and his grandkids. The other half of that bonding experience is meant to be a viewing of their favorite movie, or at least the older one's favorite movie -- Spider-Man: Into the Spider-Verse -- which should occur at some point later in the weekend (we're here until Monday).

The bonding experience, though, was a fairly high-risk, high-reward proposal. It was both the reason for the Earth Stood Still viewing, as well as one of the greatest reasons not to view it.

See, The Day the Earth Stood Still is boring. Or so I thought when I watched it, which was likely in my late teens or early 20s.

It's a movie about aliens, alien spacecrafts and alien robots that doesn't have all that much of any of them. The main alien looks exactly human, and doesn't even do any non-human things other than speak an alien language (when he's not speaking English) and easily solve complicated mathematical proofs that even the best human minds of the day struggle with. The robot looks cool but is actually not in it all that much. Most of the movie involves the alien being on the run, disguised as a human as he looks after the son of another woman sharing his lodgings, and tries to find a brilliant professor.

As a reminder, they are 8 and 5, though the older one turns 9 this Sunday (and the viewing of Spider-Man may be on his birthday). That's at least ten to 15 years younger than I was when I saw it, and found it boring. And I'd venture that my attention span back then was far better than theirs would be now, obviously at the age I was, but especially at the age they are now. I just didn't have the distractions they have today.

Having them start watching The Day the Earth Stood Still, and quit watching it 15 or 20 minutes into the movie, could be a worse outcome than if I'd never borrowed it from the library and brought it along with us at all. It could have had the effect of curdling my dad's birthday celebration rather than leaving him chuffed.

But you know what? They were awesome.

The older one was, I believe, genuinely engaged the whole time. The younger one may have lost some of his attention at one point or another, but the only way he demonstrated that was to move from where he was sitting next to his grandmother, to sitting next to my wife. She explained some of the things that were happening quietly in his ear, which seemed to get him back on track.

The fact that the movie was only 92 minutes long undoubtedly helped get them through, but I never got the sense they were in any hurry for it to be over. Fortunately, the movie front-loads the thrills it does have. The spacecraft lands within the first ten minutes, and it's not long after that that the robot Gort is shooting the lasers out of his eyes that you see above. He only uses them to disintegrate weapons -- and two men later on, but we won't go into that -- so I knew the content of the movie would be suitable for them. But I never could have guessed how patiently they would sit through all the walking around Washington D.C. and the vague romantic intrigue between Michael Rennie's alien and Patricia Neal's mother of the young boy. I had a wince at the ready any time that stuff seemed to be going on too long, but none of it ever lost my boys.

The best part is that we watched it interactively, laughing at certain things that seemed outdated, but not in a derisive way, and giving all the right oos and ahhs every time the story took a turn. I worried that my dad would be offended by some of the extraneous commentary, but he actually participated himself willingly, as anything that was made as long ago as 1951 is going to seem slightly silly through a modern lens. His affection for the movie is nothing so solemn that it can't be punctured by a few well-timed, MST3K-style observations from an audience that was obviously enjoying ourselves.

And I was surprised at how much I enjoyed myself. I recognized it as a good movie when I first saw it, but I think I had to allow it a lot of latitude for its age and its comparatively slow pace. These things didn't bother me this time. I've had a lot of my own maturation since then.

Now the onus is on my dad for doing his part to appreciate Spider-Man, though the way he responded to the visual effects in Peter Rabbit last year (see here) suggests there's a good chance he'll just be genuinely blown away.

His grandkids have set a standard of appreciation it'll be difficult for him to match.
Posted by Derek Armstrong at 1:35 AM

Labels: spider-man into the spider-verse, the day the earth stood still