I refuse to call Kursk "The Command" 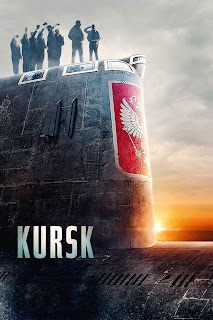 Entering some movies into some lists today, I discovered that Kursk is not the title of Thomas Vinterberg’s latest film in all markets.

I shouldn’t be surprised, really. Although it’s short enough and easy enough to remember, the title Kursk has a blunt Russian-ness (for want of a better word) that might not really sell it everywhere. Even if that is the name of the submarine that sunk to the bottom of the Barents Sea in 2000, though some of the details of the movie deviate from those events.

But The Command? Is that really the best we can do, American distributor?

It isn’t just the title change that’s dispiriting. It’s the marked difference in the posters.

You’ve seen the one for Kursk above. It’s a poster I like enough to have put it above the fold, to use the old newspaper phrase, on this post, so you see it right away when you come to my blog. I may keep rambling on for a few more sentences so as to force the poster for The Command “below the fold” so you don’t have to see it right away. Then again, I can’t really be sure what device you are going to read this on, so I might as well spare you the dilly-dallying and just show it to you: 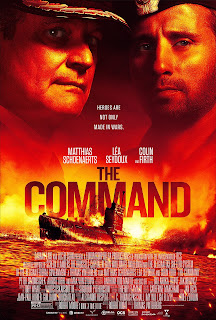 Doesn’t that poster suck? The reds hurt my poor eyes.

Fair enough if you want to advertise Colin Firth as the big star of the movie. I get it. Matthias Schoenaerts is not exactly a household name, speaking of words of foreign derivation that may not easily roll off the tongue.

But Firth isn’t really a huge part of this movie, or at least not the interesting parts anyway.

It’s hardly the first poster change to disappoint me in this way, and it probably doesn’t warrant a new post when I covered the subject and the psychology behind it pretty thoroughly in this post. (Then again, that was more than ten years ago.) In fact, it occurs to me that the original posters for The Matador and Kursk even share a sense of enviable minimalism that gets blown up, quite literally, with the flames and overexposed reds of their inferior versions meant to sell the movies to the lowest common denominator.

The reason I am writing about it, though, is that I’m faced with a bit of a dilemma.

I’ve lived in Australia for more than six years, but as a film critic I still think of myself as coming from an American perspective that I’m not eager to shed. That means usually using the American titles for the films I see when I write about them here or include them on year-end lists. In keeping with this, I should adopt The Command, even grudgingly.

But the fact of the matter is, I first learned of this movie from my wife, who saw it at MIFF and called it Kursk. I then watched it on our plane ride home from the U.S. earlier this month, on Qantas, where it was also called Kursk. I had too many instances of knowing this movie as Kursk to change horses mid-stream, especially when the other horse is so bland, generic, and shitty.

If Kursk is too blunt and The Command too forgettable, maybe UK distributors got it right. There the movie is called Kursk: The Last Mission, which could be the best of both worlds. It provides a context for an otherwise unfamiliar Russian word, while also getting in some marketing friendly words that help establish the life-or-death stakes of the movie.

But I can’t adopt a title that wasn’t used in either my current country or my home country, but only in a country in which I haven’t set foot in 33 years.

Fuck you, The Command.
Posted by Derek Armstrong at 2:53 PM