I guess you can't trademark a day 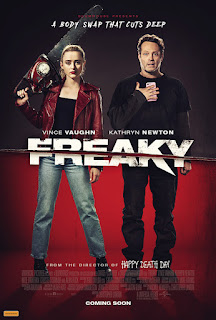 If you can believe it, I didn't realize the title of the body-swapping horror comedy from last year, Freaky, was actually a nod to Freaky Friday until I started watching the movie Thursday night. And I can't blame the fact that I only saw Freaky Friday (the original) for the first time earlier this year. Everyone knows that high concept even if they haven't seen the movie.
What clued me in was actually a reference to a different movie.
When Freaky opens, we see a couple cold open kills after the words "Wednesday the 11th" flash up on the screen in letters dripping blood.
That prompted two thoughts:
1) "So wait ... Thursday the 12th, and then Friday the 13th! FREAKY FRIDAY!"
and then
2) "Wait, are they allowed to reference Friday the 13th in this movie?"
Only at this point did I slap my forehead -- metaphorically if not actually -- and realize that the unending series of slasher movies starring Jason Voorhees does not have sole dominion over references to the unluckiest day on the calendar.
Freaky does lean into the comparisons a bit, though. The Jason Blum-produced film has another Jason it obviously wants us to think of with this appearance of the Blissfield Butcher, the character played by Vince Vaughn: 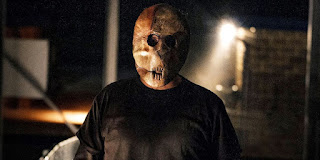 That may not be a hockey mask, but it's close enough.
Leave it to Blum -- in collaboration with Happy Death Day writer-director Christopher Landon -- to figure out how to allude to something without directly thieving from it. Nothing else about Freaky actually relates to the misadventures of Mr. Voorhees, so plausible deniability abounds. The shrewd move here is to make us think of Jason if that's a good thing for us, or allow us to discard the associations if that works better. Blum has gotten to this point in his career by figuring out how to give all sorts of different people what they want.
They could have taken steps to steer clear of the association with the existing franchise, but why would you? The movie owes a more obvious debt to Freaky Friday, and if the Friday part is already a fixed part of the "adaptation," then why wouldn't you take the next obvious step and make it Friday the 13th?
Besides, according to the internet, the associations of Friday the 13th being an unlucky day go all the way back to the year 1307, with the arrest of the Knights Templar on that day, and may have come into public consciousness exactly 600 years later with the 1907 release of Thomas Lawson's novel of the same name. It was another 73 years after that that the first Jason movie was finally released.
Also, I don't care what might be begged, borrowed or stolen from that franchise, because Freaky is way better than any Friday the 13th movie I've ever seen. I simply loved this movie -- everything about it, really, but especially the performances of Vaughn and Kathryn Newton in the key roles. It's also way better than Landon's Happy Death Day movies, and this is with me liking the second one quite a bit more than the first.
I mightn't have written this today -- this marks posts on nine straight days, and both you and I could probably use a day off. But how could I miss the chance to publish this on a Friday?
You know I couldn't. Might as well tell Jason Voorhees to wear a fencing mask.
Posted by Derek Armstrong at 2:53 PM