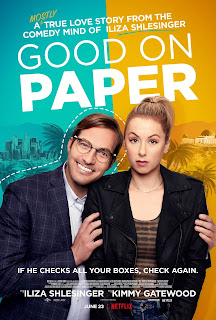 The following disclaimer at the end of films has always struck me as a bit disingenuous:

"This is a work of fiction. Any resemblance to persons living or dead is strictly coincidental."

It's legalese they slap on a film to try to stave off lawsuits, though that probably would not really stop a determined plaintiff.

Because we know writers are supposed to "write what they know," we also know that most characters in most movies are based, in whole or in part, on someone they know. While the direct line of descent is sometimes obscured -- most people don't know a person who swings a space laser sword, for example -- often times it is a lot less veiled.

But then there are the times when it is transparently bullshit, as in Good on Paper.

The new Netflix film -- well, it's a month old, but I just watched and reviewed it out of desperation while we are in lockdown -- is quite openly based on star Iliza Shlesinger's own experience. She's a talented comedian who was the first female winner of NBC's Last Comic Standing in 2008, and has since done five comedy specials for Netflix as well as dabbling in a number of other projects. She's also recently tried her hand in acting, most notably Spenser Confidential (which I've seen, and I enjoyed her albeit outsized performance) and Pieces of a Woman (which I haven't seen, but I understand that's some pretty heavy material, which says promising things about her range as an actress). On a personal note, she hosted a comedy event in a really small location that I attended more than a decade ago, where a friend was also appearing as a comedian, so I almost feel like I know her -- though not really.

In 2015 she revealed an extended comedy bit called "Lying Bryan," about a dating misadventure that was ultimately the basis for Good on Paper. I don't think anyone is trying to pretend this is not the source of the material, nor that this dating misadventure didn't actually happen to Shlesinger.

But the character in this film (Dennis by name, played by Ryan Hansen) is not based on the real Bryan, who was probably not actually named Bryan? Really? This is a purely coincidental resemblance?

This is of course not the only film that has done something like this, though as with anything I write about on my blog, it takes one particular example to inspire me to put fingers to keyboard.

However, this does create an opportunity to talk about another funny thing that I'd stuck in my back pocket and did not ultimately expect to use here.

When I watched Eternal Sunshine of the Spotless Mind a few weeks back for my I'm Thinking of Kaufman Things series, I happened to be watching the credits more closely than I normally would or than anyone should. When it got to the above disclaimer portion, I noticed a typo that somehow got by them before they released the final version of the film.

The disclaimer explained that the characters were "fictious," not "fictitious."

1) The characters are obviously not fictitious. Donald Kaufman may be fictitious, but Charlie Kaufman, Susan Orlean, John Laroche, Catherine Keener and John Malkovich obviously are not.

2) The characters might, however, be "fictious," because no one knows what that means. Could this have been Kaufman's cheeky attempt to defend himself in court before the fact? "I never said the characters were fictitious, I only said they were fictious."

Regarding Good on Paper, whether "Bryan" is likely to sue or not is uncertain -- though the chances are greater if his name is actually Bryan (or Dennis). If anything, he should sue for "lameness of premise." The movie's whole point seems to be that if you go against your instincts/standards and date someone who's a little pudgy and/or dorky, he will be a deceptive creep who will try to gaslight you for months on end. It's not a good look, and you know it pains me to say this, given my "personal relationship" with Shlesinger. (Better watch out or she might write a movie about me!)

Posted by Derek Armstrong at 12:37 AM