The resonance of present day 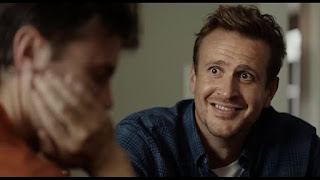 But I did notice something about my latest #1 that I thought was worth exploring in a blog post, so gosh darn it, I'm going to do it.

Specifically, Our Friend marks my 12th straight #1 movie that takes place in the present day -- or at least, recently enough to be functionally indistinguishable from the present day.

In reality, the events of this movie take place eight years ago, or nine, now that we've crossed into 2022. There are also some flashbacks within the previous ten years before that. But for all intents and purposes, this movie takes place "now."

* - there are scenes in both the distant past and distant future, but the jumping off point is "present day"
** - technically a portrayal of events seven years before the film's release, but that hardly seems significant and is about the same length of time ago as Our Friend

You have to go back to 2009, when Duncan Jones' Moon was clearly set in the future, to find a #1 that does not, effectively, take place "now." If you want a movie set in the past, you have to skip over The Wrestler in 2008 to get to There Will Be Blood in 2007.

I don't know if this is actually significant or not.

The largest number of films, overall, probably take place in "present day," as there are whole genres of films where there's rarely a function in setting it in a different time period (such as romantic comedies). Movies set in the past probably outpace movies set in the future to comprise the rest. But I'm still thinking that's only 60 to 65 percent of the movies at most. So it being 100% of my #1s over the past 12 years certainly does seem like a bit of an outlier.

Then if it is significant, I have to determine if it's just a coincidence or if there's something to it.

Theoretically, one might conclude there's something about the now that resonates with me. Broadly speaking, people watch movies to grapple with themes they feel are relevant to their current lives. (Or to laugh, or to be scared, or to watch cars fly in outer space, but you get what I mean.) I might extrapolate from my recent results that I am more touched or intellectually provoked by a movie that is set in the here and now, whose application to my life is crystal clear.

But it's easy to find exceptions, movies that were purposefully set in the past but are clearly in conversation with our current moment. This year a good example is The Last Duel, which was set in the 14th century but feels as of-the-moment as any film released in 2021. While Ridley Scott's film probably did not have a realistic shot at my #1 spot -- it was bested by three films set in the present day -- you can't say the same for Celine Sciamma's Portrait of a Lady on Fire in 2019. That enormously affecting film, set in the 18th century, probably only missed out on being my #1 in a coin flip with Parasite. (Though subsequent viewings have confirmed I still give Parasite the slight edge.)

I think one thing that's true is that a movie set in the present day doesn't have to try as hard to seem relevant to the moment. It can sort of stumble into relevance by being both set and made right now. Whereas there are many movies set in the past that don't speak to the current moment because that's not really what attracted the director to the material. Sometimes a person just wants to make a straightforward western. Ditto future films, though I think films set in the future are more likely to grow out of a present-day hope or anxiety.

I guess one other observation is that a film set in the past or in the future is much more likely to be a genre film of some kind. And films with strong genre connections are not usually the type I award my #1 spot. They can get close -- Creed, Wonder Woman, etc. -- but they are usually stopped at #2, like those films were.

Considering all this, I'm conscious of the fact that I'll start watching certain films knowing they have no realistic hope of being my #1. The time period is probably one of the subconscious factors I'm considering in any snap judgment about the likelihood of a film contending for top honors. But not always. For example, I feel like any film with science fiction elements that are integrated into a high concept -- meaning the film could be set in the future -- does have a shot to be my #1 due to the blown mind factor. It's one of the reasons I was so surprised to have only a middling response to Her back in 2013.

As usual these are just a collection of ruminations without any obvious conclusions. I don't think there could be an obvious conclusion, because I have rarely rewarded two movies that I thought were doing exactly the same thing, or even very similar things. Yeah, both Eternal Sunshine of the Spotless Mind and A Ghost Story are about memory and loss and the passage of time -- subjects that demonstrably resonate with me -- but they go about exploring those issues in such different ways that I don't think anyone would even begin to compare them.

Now that I've had this realization, I do wonder whether it will affect how I view candidates for my #1 of any given year -- both before and after I've seen them. Will I try to boost a period piece to the top spot in 2022, to prove myself wrong? Unlikely, and none of these decisions get made without oodles of thought. But it could be a subconscious thing.

If we're going to keep looking back further to when I started ranking movies in 1996, I only have one more movie set in the future (Children of Men) and two more movies set in the past (Gosford Park and Titanic). Interestingly, there are also two movies about Shakespeare in there -- Looking for Richard and the 2000 Hamlet adaptation by Michael Almereyda -- but they each only have a foot in the past, as they are both Shakespeare as viewed through a present-day lens. That might be the most interesting discovery of this whole post.

No other discoveries for now. But it's a good something to chew on.

Posted by Derek Armstrong at 3:56 PM