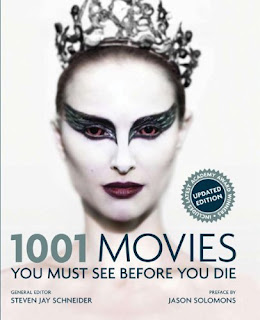 On that same trip to Barnes & Noble I discussed Thursday, I saw that they've released an updated version of the seminal movie lover's tome 1001 Movies You Must See Before You Die.

I understand the need to keep a volume like this fresh, since the list of movies is theoretically always changing. (Unless you're the kind of curmudgeon who thinks that all new movies are crap, but that's the kind of obstinate perspective that just shuts down discussion.)

Still, I can't help but feel like this book has been dumbed down for a generation of teenyboppers.

I can't speak to what all the changes were -- I can only judge this book by its cover. By three covers, actually. Those three covers being the front cover, the back cover and the spine.

The front cover shows a bust of Natalie Portman in her Swan Lake makeup from Black Swan, as seen above.

The back cover shows a scene of the crumbling dream city from Inception.

And the spine shows this:

There doesn't seem much point to tell people that they "must see" a movie that almost everyone who might buy the book has already seen. I mean, with Avatar, you're talking about the movie that grossed more money at the box office than any other movie in history. That's not what I thought this book was supposed to be about.

When I've perused through the copy that we own, which was published in 2003, I've been impressed by the obscure titles I'd never heard of it. In fact, I've watched a couple movies based purely on their inclusion in the book -- and would never have known about them otherwise. The point of any guide of movies you must see is to expose you to movies it would not otherwise occur to you to see. Right?

But the real point of a book like this is to sell copies of itself. And the way to do that is to emblazon it with three of the most talked about movies of 2009 and 2010. Even if one of them, Avatar, has seriously fallen out of favor in many cinephile circles. If it was ever in favor in the first place.

To be fair, I have to ask myself what I would put on instead. After all, Black Swan is a reasonably "cool" option for the front cover. I didn't love that movie as much as some people did, but I had a very healthy respect for it. And although Portman did win the Oscar, I suspect there are some people who didn't see it because they thought it was scary and/or confronting. In any case, it's not the kind of movie you would call "easy."

Inception is a bit more of a move toward the mainstream. In fact, you could say it was as mainstream as Avatar, except that it obviously did not do the box office Avatar did.

Avatar? Well, Avatar grossed $760 million in the U.S. and $2 billion worldwide. And is highly suspect in most areas not directly related to its technical achievements.

Maybe I'd go for something like The Social Network. Yeah, this is hardly some little indie that snuck through theaters without getting its proper due. But I could get behind it as an example of vibrant filmmaking that challenged norms. (As though Inception is not. I guess I'm working myself into a corner here.) But really, it wouldn't work from a marketing perspective. There's no image from The Social Network that's as arresting as Portman's face as you see it above.

I guess what I'm really struggling with is the idea that you have to appeal to people with movies they already know and love, to get them to discover movies they don't yet know or love. I probably shouldn't be struggling with that, though. It's a fairly basic marketing strategy, and beyond that, it just makes sense. Are you really going to use images from a genuinely overlooked gem, something most people don't know about, for any of your three covers? If you do, that's simply foolish.

I guess what I'm really saying is "Wahh! Avatar is not that good!"

But more to the point I'm trying to make, I can draw a direct contrast between the marketing strategy they used this time around and the one they used in 2003. Back then, Janet Leigh screaming during the shower scene from Psycho -- a movie that came out 43 years before the book was published -- adorned the front cover. That's a movie there is no question everyone should see before they die. It has stood the test of time and earned that designation through its durability. And it certainly seems to be iconic enough and attention-getting enough to have sold copies. (It sold a copy to us, anyway.)

The back cover? A picture of Groucho Marx. You can't tell what movie it's from, but does it really matter?

To show their savvy, however, the editors also included something current. The spine showed a picture of Catherine Zeta-Jones from the then-current best picture winner, Chicago. Will Chicago always belong in the list of 1001 films? I'm not sure, but I hope so. If they were committing themselves to some sense of permanence within movie history, at least they were only gambling on one movie, not three.

So couldn't they have at least given us one classic of the three this time around?

Here's something else interesting to consider: Since the number of movies in the book must always remain at 1001, what movies do they kick out with each new installment? And who decides that? What poor movie is Avatar sending to the showers?

You could take two different approaches to this question. On the one hand, if these movies are really considered to be required viewing, they can't be completely quirky choices. They have to have reached some level of commonly acknowledged achievement, or else it could be absurd to suggest that a cinema lover would die incomplete without watching them. So you could drop some titles that were submitted by a snobby contrarian who hasn't had any role in this book for two decades.

But then you go back to the argument that there are certain movies that are so well known, like Avatar, that they don't need to be trumpeted in a setting like this. Their reputation precedes them, whether that reputation is positive or negative. (Avatar has its share of people in both camps.) At what point does a best picture like Gladiator, which certainly seems to have lost its luster over the years, continue to have residency in this book?

Maybe the real value of Avatar in a book like this is not for the 2012 edition, but for the 2042 edition.

By 2042, most of us will have forgotten how much of a disappointment it really was.
Posted by Derek Armstrong at 2:24 AM

Personally I like that Black Swan is in this updated version. But then I'm a biased and unrepentant Black Swan supporter.

I've actually never paid any attention to the 1001 Movies You Must...etc. I find new/old cool movies to check out through various formats all the time and I prefer doing it that way as opposed to meandering down some checklist. Maybe the book is a good starting point for classic film, as you kind of suggest, but when I reached that point years ago I went for Ebert's Great Movies instead.

In any event, this....."Unless you're the kind of curmudgeon who thinks that all new movies are crap, but that's the kind of obstinate perspective that just shuts down discussion." Just yes.

Yeah, I agree with you. My discussion of Black Swan in this context is problematic in a couple ways. It's not only a very good movie (I actually ranked it in my top 20 that year, even if I seemed lukewarm about it in this post), but it's also pretty edgy and challenging. But the cover? Especially when you contrast it with something like Psycho? Too soon to say. But I'm down with it.

Really, I just wanted to rip on Avatar, and Black Swan got caught in the crossfire.

To be honest, I don't use this book that much either. One time I started going through to see how many I'd seen. I got to about 1931 and never made it any further. However, it's one of those books I just like knowing I have. (It was actually my wife who bought it or received it as a gift, before we met.)

I've never been terribly interested in this kind of thing, largely because 1,001 is too unwieldy in my mind for any practical purpose. I tick off my progress on the list on ICheckMovies.com, but only incidentally as I check off movies in general. I make no conscious effort to progress through that list.

I would suggest, though, that something that claims to be a list of movies one must see before death takes it upon itself to be a sort of Movie Hall of Fame. Such lists are bound to be repetitive when they get into an item count as high as 1,001, I have a hard time imagining that any exclusions even seem worth arguing about. That is to say, even if you determined what got bumped to make room for Avatar (which, incidentally, I still have yet to see), would you even really care?

What we ought to do, though, is compile 101 Movies You Probably Haven't Seen or Even Heard Of, but Maybe You'd Like. We could even use Flickchart data for this purpose. Anything that has been seen by < 15% of users, but with a win percentage > 75%, for instance, would be a good place to start.

Good suggestions. I tend to agree that the size is unwieldy. I think the key for any movie fan is to have some method you use to get at older films that don't seem as "easy." For me, that's attacking them three per month by the same director/with the same star as part of my Getting Acquainted series on this blog. I like your Flickchart idea too. And no, I don't really care which movie Avatar kicked out -- but I bet anyone affiliated with that movie cares!