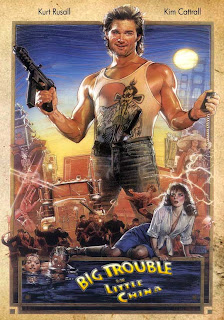 For the first half of my life, I thought Big Trouble in Little China must be about the worst movie ever made.
It's taken the most recent half for me to see it, an event that finally transpired on Saturday night. And I gotta say: Wow, what a movie.

I didn't realize movies had their tongues this firmly planted in their cheeks, this many years ago.

Of course they did -- parodies have existed for almost as long as movies have existed. But because I never realized that, my only conclusion was that this movie must have been an epic disaster.

In 1986, when John Carpenter's movie first came out, I saw a commercial for it that left quite an impression on me. It had to have been a commercial, because I doubt I would have been seeing a movie where they were playing it as a theatrical trailer. I was 12 going on 13, and it's actually most likely I saw an ad for it appearing on cable a year or two later.

My conclusion? It looked like an awful, terrible movie of the poorest possible quality.

I didn't get that that was the point.

See, I didn't understand irony back then, and only thought I understood parody. I'm sure I'd already seen Airplane! -- even though I would have technically been too young to see that one shot of the topless woman jiggling through the aisle -- but I don't think I could have explained to you what Airplane! was doing, or setting out to do. In any case, the absurdity in Airplane! was straightforward -- you couldn't miss it that this movie was not on the level.

With Big Trouble in Little China, the scenes they showed in the commercial would have seemed far subtler to me. I didn't get that just turning up the ridiculous factor in an otherwise straightforward scene meant that you were making it incredibly funny to people in the know. I just figured it was a sign of poor craftsmanship. It seemed to me like a massive tonal failure, a colossal misunderstanding of how human beings really behave.

In fact, probably until sometime in my 20s when people told me otherwise, I assumed that Big Trouble was some misbegotten cousin of either The Golden Child or Howard the Duck. I considered them to be dark, murky misfires of the same ilk, at least two of those three featuring a large Asian cast. I haven't actually seen Howard the Duck, but I saw enough imagery of it at the time that this movie reminded me of that one. It must have been the shoddy puppet creatures in Big Trouble. In fact, I had the oddest sense of deja vu on Saturday, when I saw the scene I remembered from the commercial, where that hairy creature with the gruesome face shambles through a tunnel carrying Kim Cattrall over his shoulder. It might have been that single moment that made me consider Big Trouble a sad, alienating movie I wanted nothing to do with.

Thanks, young Vance, for finally developing a sense of humor.

For anyone who hasn't seen it, Big Trouble in Little China is an absolute hoot. I'm not going to say it's a better movie than Airplane!, though I'm sure a lot of people would argue that. But I do think it gives its audience a ton of credit by not having to be quite so overt with its humor. Sure, the humor in Big Trouble is pretty over the top. But none of it involves total anachronisms and cutaways that immediately call attention to the fact that the whole thing is a joke. Big Trouble's humor is more a pastiche of absurd dialogue, toying with iconic character types and moments of gleeful special effects mayhem.

Shall I spoil a few moments to whet your appetite for a possible viewing? Okay, just a few.

- Playing Jack Burton, the incomparable Kurt Russell, in his third collaboration with Carpenter, has unwittingly driven his semi into a secluded alley in San Francisco's Chinatown, with his friend Wang Chi (Dennis Dun) riding shotgun. About a dozen heavily armed Chinese gangs appear on the scene and begin an extremely elaborate shootout. After about five minutes of them shooting at each other, we cut to Russell sitting in the cab of his semi, freaked out, holding a Bowie knife. Yep, a Bowie knife.

- Burton later gets a hold of a machine gun, but when he fires it, it fires in single blasts, like a shotgun. No explanation is ever given. 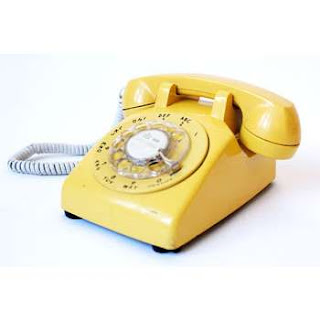 - Burton and Chi pretend to be members of the telephone company in order to break into a building to find a secret passage. To pull off this charade, Burton walks in confidently holding a single rotatory telephone in his hand. You know, the kind that looks like this. How that would help an actual phone company employee fix a phone problem in a building is anyone's guess.

- At one point in the movie, Burton tells a group of people "If we're not back in two hours, call the president." It is completely unclear what he means by this.

I'll stop there. Besides, Big Trouble in Little China is one of those movies where you laugh so much, but everything is so random, that you can't even remember half the things you laughed at when the movie is over.

Unfortunately, I was not the only person who didn't get what Big Trouble in Little China was supposed to be when it first came out. The film failed in a major way -- so much so that it disillusioned Carpenter about Hollywood and prompted him to focus on smaller, more independent-minded movies.

But not before he gave us They Live, which operates on a similar level to Big Trouble, two years later. That's one I've been trying to push on my wife for more than a year. Now that she laughed so hard and loved Big Trouble so much, maybe she's ready.

As for me? Maybe it's finally time to watch Howard the Duck from my Netflix instant queue.

Could it be that George Lucas' famous flop is also a brilliant parody being mistaken as incompetent?
Posted by Derek Armstrong at 2:21 AM

NO, my friend, it could not be that Howard the Duck is a misunderstood stroke of genius.

However, I'm so glad you came to the light about BTiLC. It's supposed to be silly - it's easy to see as Kurt Russell spends part of the movie acting like he wants to be John Wayne; he spends the other part undermining himself by (a) slight incompetence and (b) not knowing what's going on.

There are some elements that are just totally ludicrous - like a villain's lair that includes a giant evil Buddha that's COVERED in neon lighting.

But for me the highlights are when Jack Burton is talking to David Lo Pan. The way that they snap at each is great! And of course, "My truck. My truck!"

It can look all sorts of silly and bad, but this was a fun, imaginative, and different movie. It won my affection long ago...

Welcome to the club, Vance!

Speaking of Russell not knowing what's going on, I love how in the final battle, first he knocks himself unconscious by shooting a clump of plaster from the ceiling down on top of his head, and then, when he does join the fight, he spends a lot of it looking around with an expression that seems to say "Wow, this is all pretty groovy and unusual."

Yeah, I realized awhile ago that the movie was probably good -- I just couldn't get it on the schedule until now. You know how that is.

My wife is on board for They Live next Saturday. Score!

They Live is no Big Trouble In Little China. Maybe Roddy Piper is no Kurt Russell. Its still worth it though.

And YES, Welcome to the club.

Oh, I've seen They Live. You're right that I'll probably end up liking Big Trouble better, but They Live is worth seeing for two things alone:

1) The fight between Piper and Keith David that lasts like 15 minutes.

2) This line: "I have come here to chew bubblegum and kick ass...and I'm all out of bubblegum."

Agreed about the fight. But noty about the bublegum line. Its just not tough enough to be of any use (and I guess that's the point, right?) to me. I want toughness out of Piper. Jack Burton wouldn't have used "bubblegum".

BUT they live is also the source of the famous Shepard Fairey "Obey" theme. And for that, its worthwhile.

Vance, there's another great aspect to They Live: there's this whole aspect to it that's either intensely pro or anti libertarian. I almost can't tell which.

Either way, it really goes into the depletion of American jobs, the rich selling out the public, and people not be allowed to do what they want/follow their vocation.

It's super-funny because it makes scenes in the movie feel like some kind of socio-political screed - and even funnier, it seems like the kind of screed that says "go rob a bank because taxes are too high!" It's a glorious new element I noticed in my last viewing.

And the movie is already asking us to implicitly buy Rowdy Roddy Piper as basically, a jesus who beats people up.