I finally broke down and bought Cars 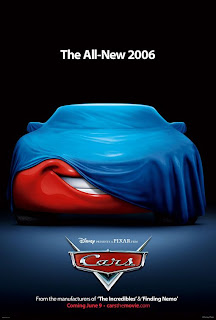 After bitching and moaning about not wanting to pay full price for Cars several times on this blog, I finally manned up and did it this past Tuesday.

Even for just the DVD (not the BluRay), and even at Target (not some top-dollar place), it was still $19.99. That was about twice what I wanted to pay for it, especially since you can get many DVDs (especially at Target) for a quarter of that price. And not just the sucky ones.

But that twenty bucks has already bought me four hours of relative quiet this past Saturday and Sunday mornings. The movie is 116 minutes long, making it an absolute beast by normal length standards for children's entertainment. But my son watched it through to the end both mornings, only taking about five minutes to run around the house and create havoc during each viewing. Each time, I was able to get him back on task, and he watched the home stretch of his own volition.

During those two two-hour blocks, I wrote a press release for work on Saturday (that's something I'm doing these days), and Sunday's Audient post on Sunday.

If you're a parent, you know you can't put a price on getting some time to yourself -- even if you have to do it by letting a Pixar movie babysit your child. At least my son has already been watching Toy Story and Up, so it's not like I'm crossing some new line.

My only complaint now is that the video has a strange glitch that affects only one part of the movie, but it affects that part every time through. When the Disney logo comes up, and that star makes an arcing motion over the top of the Magic Kingdom, the star pauses in its path, three quarters of the way through the arc. If you want it to move onward, you have to fast-forward it. However, after that, the DVD plays normally all the way through the end of the credits.

Probably another small price to pay for my sanity.
Posted by Derek Armstrong at 1:48 AM