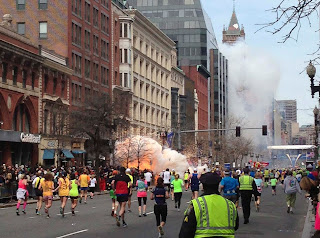 I've struggled with how to address the Boston Marathon bombing on my blog, especially since it's a movie blog. Then I decided, screw the theme. This is what I went with.

I decided it was important to go running on Monday.

Running is not something I do regularly, though it is something I hope to do regularly going forward. See, within the past month I decided that I want to run a marathon at some point in my life. I was a cross country runner for three years in high school and college, so I have the ability. I've run as many as ten miles in a row before, and though I'm under no illusions about how easily or how quickly I could pick it back up to more than double that distance, I also realize I'm a legitimate candidate to try.

Besides, Monday was also the day they bombed my hometown.

I grew up in Lexington, the Revolutionary War town to the northeast of Boston. Lexington is known as the site of one of the battles that kicked off our successful rebellion against the British. As a matter of fact, early in the morning on the third Monday of every April, this battle is reenacted on the town green. Thousands of people turn up as early as 5 a.m. to line the green and watch the minutemen and the British duke it out in a battle that amounted to a massacre for the locals. The fledgling Americans may have lost that battle, but as we all know, they (we) won the war.

My dad was involved with the facilities committee at our church, which looks out over this patch of lawn where the battle is reenacted. So he had access to our church steeple, meaning I got a bird's eye view of the reenactment a couple times as a young and wide-eyed child.

This third Monday of April is a state holiday known as Patriots Day, and that's the day of the running of the Boston Marathon, one of the world's most famous and most prestigious. It's also the first day I myself ever ran in a race. I couldn't have been more than eight or nine years old when I ran my first five-mile Patriots Day road race in Lexington, an experience that taught me I might have an aptitude and a love for running. The race was, and probably still is, one of a number of town events on Patriots Day, including a big parade.

Because of a shift in my son's daycare schedule, I was already scheduled to go running on Monday instead of Wednesday as I normally would. This was before I heard that two bombs went off near the finish line of the Boston Marathon, ultimately killing three people and injuring more than 170.

I'm not quick to shed tears in times of tragedy. In fact, even though I was slack-jawed and in a daze for weeks after 9/11, I never shed a single tear.

I worked the rest of the day in a bit of a daze, but continued to fulfill my duties as I learned additional bits of information here and there. I picked up my son and brought him home, and laced up the new running shoes I'd bought two days earlier.

I've been listening to podcasts while I run, but this wasn't the right accompaniment to my current twin senses of anger and pain. So I put on Prodigy's album Invaders Must Die, thinking nothing of any metaphorical significance it may have had, thinking only of the driving beats that would propel my body to run the anger out.

The first track, the title track, has obvious meaning in terms of the xenophobia involved in a terrorist attack. The next track was "Omen," which continues the, well, ominous mood. That goes right into "Thunder," which includes the following refrain: "I hear thunder, but there's no rain. This kind of thunder breaks walls and window panes." I had just earlier heard about the windows of shops on Boylston Street blowing out from the blasts.

These three tracks are followed by "Colours," "Take Me to the Hospital," "Warrior's Dance" and "Run With the Wolves." It's like someone engineered this album specifically to get out the frustration after a marathon in your town is attacked by terrorists. (Even though I didn't quite get to the track called "World's on Fire.")

I didn't stretch before this run, and I didn't pace myself once it started. I hit the track and ran like I was chasing ghosts, or running from them.

And as I thought of the kinship between myself and my hometown, and the physical activity that linked me to the tragedy that had occurred there a couple hours earlier, my legs gained speed and my vision blurred.

Anger and frustration can only fuel the body so far, and pretty soon I was forced from a run to a walk. And I could have stopped right there and just gone home, powerless to do anything less or anything more than I was currently doing.

But I picked back up and jogged for another 15 minutes -- enough to get me through "Run With the Wolves," anyway.

I owed it to the runners in Monday's Boston Marathon, and the city itself, to keep on going.

In my car on the way home, I moved ahead to the last track on Invaders Must Die, a joyous, lyric-free anthem that can almost be described as the electronic version of marching band music.

The song, appropriately, is called "Stand Up."
Posted by Derek Armstrong at 12:53 AM

Sorry you had to write this, man. I truly am. But you wrote it beautifully. Hope it was cathartic.

And while it might not be appropriate in context of what you wrote I can't help but say.....you grew up in Lexington? I find this so awesome. I fancy myself an exceedingly amateur Revolutionary War buff and when my sister and I happened to be passing through Boston a few years ago I forced her to stop in Lexington. There was no way I was passing through Boston and not setting foot on the Lexington green. And then I made her take the tour of Buckman Tavern. Great day.

I love that you geeked out over Lexington. Since I grew up with all that stuff around, naturally I tended to look right past it. However, I do have a fair amount of pride in my origins.

Yeah, it was a tough Monday, but honestly, the death toll was much lower than it had any right to be. We were lucky.