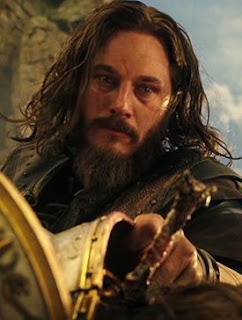 It's been a long time since I've seen a good old-fashioned, out there, really ill-considered performance in a movie.

As I watched the lead human in the story sneer, leer, grin and glisten, I was trying for the life of me to figure out who the joke was on.

I was also trying for the life of me to figure out why Channing Tatum didn't learn his lesson from Jupiter Ascending and was trying to play another Character with a capital C.

Of course, the man pictured here -- let's call him Crazy Eyes -- is not actually Channing Tatum. But since I'd never heard of Travis Fimmel before (I haven't seen Vikings) and I figured that a potential blockbuster had to have a big star headlining the movie (Ben Foster doesn't count), I spent the whole movie thinking that it was Tatum just totally going for it. I mean, he didn't look 100% like Tatum, but I could easily imagine that it was Tatum going hairy and uglying himself up a bit (kind of like he did in The Hateful Eight). I mean, one would hardly call Fimmel, a model, ugly. But in this part, he's got stringy hair and red-rimmed eyes -- glowing, pulsing, demented eyes.

And I'm not the first person to have confused Fimmel and Tatum. Here, the internet is helping me out on this one: 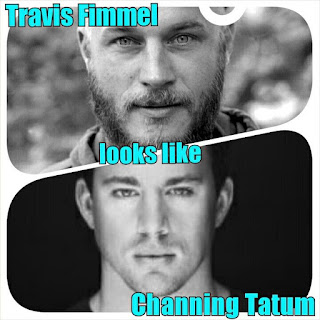 Except, you know, Travis Fimmel's got crazy eyes.

But let's talk a little bit about that performance. He (or director Duncan Jones, I suppose) made the decision not to give us the usual stolid, determined hero who has a kind manner and can be jovial when he wants to be. We've seen that plenty of times. Instead, Fimmel plays the character Lothar (of the hill people?) as a kind of jester teetering on the verge of insanity. That mindset is not apparent in anything he does, as those things all still fall basically within the realm of traditional hero stuff. It's that unplaceable glimmer in his eyes, that hint of glee that creeps into even scenes where it does not seem appropriate, that distinguishes him.

But if it were just that, the performance wouldn't truly be bad. The way Fimmel responds in the emotional moments is even funnier. I won't tell you exactly what his character has to respond to because that would constitute spoiler territory, but there's this one moment where he's required to quiver with rage, and he just can't do it. His desperation leading up to that moment is similarly laughable.

So yeah, Warcraft is not great. You know this. But I thought a lot of the stuff related to the Orcs (do they have to pay a royalty to the estate of J.R.R. Tolkien?) was really good, especially visually, and especially the opening ten minutes before the title. So I guess it has something in common with one of this year's other big (critical if not commercial) flops, Batman v. Superman, which also had a great opening.

I read the plot description just now on Wikipedia and it's a bit less convoluted than I thought it was when I was watching it. So something clearly got lost in translation.

One actor I did correctly identify, despite the fangs protruding from her mouth, was Paula Patton as a half-human, half-orc character. The only reason I thought it wasn't Patton is because she looked dynamite and I was surprised that they would have cast a 40-year-old actress in this role. She was one of the movie's visuals I must say I quite enjoyed. 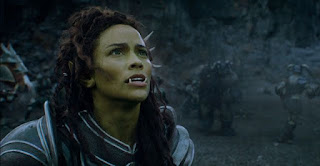 Posted by Derek Armstrong at 10:45 AM