Daring to have the bad guys be black 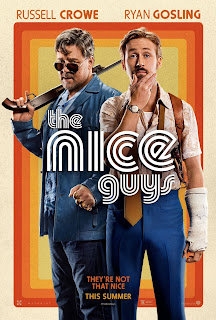 Warning: The following post contains spoilers about The Nice Guys, starting very near the beginning.

One of the most troubling character stereotypes in Hollywood was also borne out of some of the best intentions. That character is the saintly African-American, sometimes referred to more roughly and confrontingly as "the magical Negro." The idea behind this character is to engage in a sort of cinematic affirmative action. The idea is that to counteract negative stereotypes of black people in society, you want to present only positive images of them on screen. While this is well-meaning, it becomes its own kind of perniciousness because it again fails to treat the person as a person, capable of imperfection and moral complexity. It's a form of pandering, even if it has only the most positive of motivations.

The Nice Guys is a good indication that some filmmakers are daring to go back in the other direction.

The Nice Guys, Shane Black's new 70s noir comedy, has exactly two black characters in it, and they are both sinister. One of them is not known to be sinister from the outset, hence the spoiler warning.

The one known from the outset (in case you still haven't heeded my spoiler warning) is played by Keith David. He's a heavy who shows up at Russell Crowe's apartment to cuff him around in the first act. He's at least the less ostentatious of the two heavies who show up in that scene, the other played by a scenery-chewing (but entertainingly so) Beau Knapp.

The second (now you really need to heed the spoiler warning) is an assistant to Kim Basinger's character, who at first seems to be sympathetic and retains the fancy of our leads even after she is proven to be nefarious -- perhaps only because they find her attractive. Her name is Tally and she's played by Yaya DaCosta.

Perhaps Black thought he could get away with it because of his last name.

I don't have a problem with this, mind you. I do think it's kind of outdated to worry that if you have African American characters who are bad in a movie, that means the movie is racist. However, I did certainly notice it, which means neither I nor the movies are as post-racial as we would all hope to be in the era of Barack Obama. (But also in the era of Trayvon Martin.)

What I do find sort of interesting is the lack of even a token character of color to offset these two. Then again, I guess tokenism is the very thing we should be righteously lashing back against.

When I try to think back to the start of this trend, or at least my awareness if it, I can trace it a 1987 movie I didn't even see. Street Smart stars Christopher Reeve as a journalist who gets tangled up with black pimps, one of whom is played by Morgan Freeman. I remember people talking at the time about how the portrayal of Reeve as some crusading white savior was irresponsibly contrasted with the ugly portrayal of the pimps, who basically represented the scum of the earth. Ironically enough, it would become Freeman himself who would most exemplify the "saintly African American" for the next 20 years. I mean, he even played God. Only recently has he started playing some characters of suspect moral fiber. (Well, he was the villain in Now You See Me, anyway.)

But really, what matters is how they're used. Jackson is black, but not represented on screen as black in a way that is historically hurtful -- say, a pimp. Actually, he's an internet billionaire with a lisp. He defies stereotypes, not conform to them.

And I guess that's what's fine about David and DaCosta in The Nice Guys. They "happen" to be black. Sure, they are up to no good. But they're up to no good in ways that are interesting, complex. They demonstrate a shrewdness borne of intelligence, not trickery. They are characters with nuance ... which is all anyone ever really should want.

When you come right down to it, all this really is is an examination of perceptions. And I don't hear anyone saying The Nice Guys is racist because it has two black characters who are bad. I've even googled it just to be sure.

And if any bets needed hedging, the three most despicable characters -- Basinger, Matt Bomer and Knapp -- are all terminally, unavoidably white.

As for the movie itself, well, it's a blast. It's the movie I wanted Inherent Vice to be. Ryan Gosling and Crowe have terrific chemistry, and the movie is laugh-out-loud funny at times, though it also regularly reminds us how serious everything actually is. It's an enviable mix of tones that works 93% of the time. Some of that 7% is in the somewhat unsatisfying conclusion, but really, I'm fine with 93% of any movie working.
Posted by Derek Armstrong at 4:51 PM

I haven't seen The Nice Guys just yet, but this was an insightful post. You hit on why The Magical Negro is nearly as harmful as any other stereotype out there. And I agree, just having a black character be evil is not automatically racist. The ways in which they are evil count for a lot. Great post. If you're interested I actually did a post a while back specifically about Morgan Freeman and this stereotype: