A golden age of production design, and other Founder thoughts 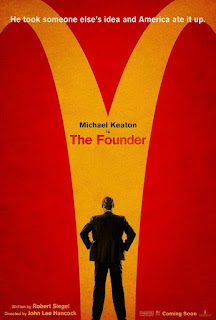 A good writer should always analyze his/her writing habits to make sure not to slip into any bad ones, like repeating the same thoughts/sentiments/ adjectives over and over again.

In the pursuit of that goal myself, I've noticed that I tend to use the word "immaculate" when talking about a film's period production design. I couldn't speculate on how many times I've used that over the years, as that kind of thing tends to be difficult to search, but I know I've used it more than once in the past year. Enough times so that the last time an instance came up that called for it, I made a special point to go in another direction.

But you know why I've been using it so much lately? Because production design is immaculate these days.

I'm not sure we ever went through a stretch when period movies were full of anachronisms, but let's just say that nowadays that kind of thing is unheard of. Movies make a special effort to get the details right these days, one that goes beyond what would seem to be the ordinary call of duty.

The Founder, which I saw last night, was just the latest example. It didn't go out of its way to do anything difficult, but the setting just felt genuine and lived in. "Lived in" is not to suggest it was grubby or grimy, and in fact, the whole thing is pretty shiny, in keeping with the theme of the endless possibilities of capitalism and the American dream. (A theme the film eventually looks askance at, I should say.)

In particular, oh those 1950s era McDonald's. How gorgeous they look. They made my mouth water for burgers that I know are not that good. Those damned, beautiful golden arches in their original conception.

But it doesn't even have to be a good movie to have good production design, though The Founder certainly is. Even movies that don't do much for me seem to really knock it out of the park with getting the details right.

Which is no easy task. Every time you are filming outdoors, for example, you have to remove every trace of something that gives away the year in which you're actually making the movie. But you also can't just leave an empty set, so you need to get x number of era-appropriate cars, etc.

If I were worth my salt I'd have done some research and listed a bunch of other films where this is also done well, but my point is kind of that they all do it well, so specific examples are kind of superfluous.

Fortunately, I have a couple other thoughts on The Founder so I might as well move on from my unconvincing case about the golden age of production design.

Given the last couple years he's had, it's kind of hard to believe that we were without Michael Keaton for so long.

But it's true -- even though he never stopped working, he didn't really do anything prominent for a good first 15 years of the 21st century. A few low-profile indies (Game 6, The Merry Gentleman) and voice gigs (Cars, Toy Story 3) aside, he was largely absent from movies that anybody saw. (And even in presenting the exceptions to the rule, I'm still listing movies that nobody saw: Game 6 and The Merry Gentleman). He'd show up with bit parts in comedies (The Other Guys) or lead parts in horror movies (White Noise), but overall, he just wasn't the Michael Keaton whose every movie got our attention.

Birdman changed all that.

Keaton then appeared in two best picture winners in a row, and though I don't think The Founder will make it three for three, it's a really good role that Keaton plays really well, in a serious movie with lofty ambitions. You need look no further than his opening monologue to the camera to be reminded just how subtle he can be, and just how well he does what he does.

I'm so glad I don't have to miss him anymore, something I didn't even realize I was doing until he returned.

More than just the supportive wife

Speaking of doing subtle work, I loved Laura Dern's performance as Ray Kroc's first wife in this movie. In a role that might not have been anything but thankless.

The most consistently derided role for an actress -- nowadays, but probably always -- is the wife of the great man. Supportive or otherwise, she frequently lacks personality or distinction, functioning as little more than one of his appendages.

Dern's case is a bit different. On the surface, that's exactly what she looks like, as she keeps house while Kroc goes out and tries to sell people. But she yearns to break out of that mold, to be a full partner to her husband, something that Kroc will never let her do because she doesn't share his exact vision for the way he sees his life as an ever-greater scheme. She does wonder when enough will be enough for him, but when she learns that his honest answer is "probably never," she does change her ways to accommodate his. She supports him in a very proactive manner at the golf club in front of skeptical investors, and later, she scouts and brings some new franchisees to him.

As we have already said she was Kroc's first wife, it's probably obvious that things did not work out the way she hoped they would, as she was not able to support him in the way Ray wanted, even if it was totally genuine. The small ways she absorbs every new defeat, never having to call him out through shouting matches but allowing the way events play out to minutely crush her, speaks to the quality of both John Lee Hancock's direction and Dern's performance.

Among the things I never knew about McDonald's was that they stopped using ice cream in their milkshakes for a long time, to save costs on refrigeration.

What I'm wondering now, though, is what ever happened to those packages of powdered insta-shake, which Kroc honestly believes tastes just like a "regular delicious vanilla milkshake."

If you really could just pour it into water and have a yummy milkshake after 30 seconds of stirring, where the hell are those things now?

I want one.
Posted by Derek Armstrong at 4:42 PM