Men of a certain size 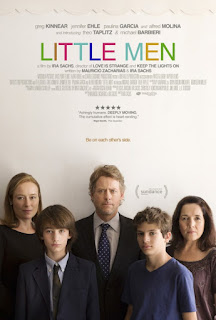 How's this for a funny coincidence? Totally unplanned, too.

On Sunday I watched movies called Little Men (Ira Sachs' film about a friendship between two boys whose parents are quarreling) and An Insignificant Man (an Indian documentary about an upstart political party in Delhi and its charismatic candidate).

I notice (and tell you about) coincidences in my viewing schedule all the time -- they call it "coincidence spotting" on Filmspotting, and I'm not sure whether or not to contract those two words -- but rarely have I noticed two consecutive titles being so similar, chosen for entirely unrelated reasons.

So now is not the time to stop telling you about them.

Little Men felt like just a bit of a disappointment, in part because I loved Sachs' last movie, Love is Strange, my #6 movie of 2014. Even as it covers some of the same subject matter. It's just inevitably not going to be up to the standards of his previous film. Filmmakers rarely make two top ten-worthy movies in a row.

An Insignificant Man, on the other hand, was better than it started out seeming. It felt instructive to watch a corrupt election in which voters are bought off with alcohol and taxi rides to the polling place, and one political opponent is actually killed when someone rams her with a car while she's on her motorbike.

Maybe this year's U.S. election was not so bad after all.
Posted by Derek Armstrong at 7:35 AM