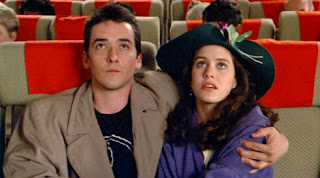 Get ready for possibly the longest hiatus in the history of The Audient.

In a few hours I'll be heading to the U.S. for three weeks. Three weeks, incidentally, will be my longest trip ever, anywhere. Some of my trips to Australia from the U.S., before I lived here, were almost that long, but they stopped around the two-and-a-half-week mark.

Now, this is not to say I will write zero blog posts while I'm gone. But it's possible I will write zero. We don't expect a lot of downtime, and I don't know if I'll use the downtime I do have to update The Audient. Not with so many movies I need to catch in time to rank them for my 2016 list, as they won't release in Australian theaters until after that.

But it'll be interesting, because a lack of writing time does not mean a lack of ideas. In fact, it's very possible that the ideas will be plentiful. All sorts of wondrous new viewing scenarios will arise over the next few weeks, from the marathons on each of my 14-hour flights, to viewings I plan to squeeze in on my iPod, to times I'll feel guilty about opting to see Moonlight instead of a friend I haven't seen in two years. Who knows what will happen when I have all these ideas and nowhere to put them.

Of course, the reality of the situation is that I probably will write two to three posts while I'm gone. I'll find the time. Lord knows I'll find the inclination.

But in case I don't ... enjoy the crunch time of your awards viewing season, since I know you, too, are preparing to finalize your lists in time for the January 24th reveal of the Oscar nominees.

Or maybe you're not. You have a life, I hear.

Merry Christmas, Happy New Year and I'll speak to you in 2017, if not sooner.
Posted by Derek Armstrong at 6:50 AM