Cat's Away 2: Inception of a new festival 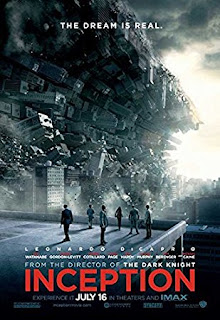 This is the first night of a personally curated film festival I'm holding for an audience of one while my wife is out of the country for nine days.

It's always useful to start a film festival with a movie whose title comments on the idea of commencement, isn't it?

My first Cat's Away film festival started on the 25th of July with Contact, a perfect title in that regard. I can't say for sure if Inception's title helped push me toward it as the opening night film of Cat's Away 2, but once the idea was implanted it took hold and grew like a virus (ha ha).

Rather, Inception was a contender for the first festival that never found a time slot. It had that in common with about 20 other films, some of which will get watched this time, some won't. But Inception penetrated through all the levels to make its way to the surface (ha ha) of Cat's Away 2.

It didn't make it here by virtue of how much it was deserving of a rewatch. This is actually my third Inception viewing, and in truth, I didn't imagine it as a film that would get watched three times by me in the first seven-plus years of its existence. Especially not after my first viewing, which I liked well enough but which left me just a titch disappointed, and not only compared to my expectations for it. I remember I had really, substantive issues with the movie, some of which still stand and some of which I may get into in this post. I wasn't yet ranking movies on Letterboxd in 2010 but I gave it a retroactive four stars, though that translated "only" to 26th for the year out of 109 films.

It was probably that second Inception viewing in May of 2011 that boosted it to those retroactive four stars (I started Letterboxing about six months after that). It might have only been three-and-a-half after my initial viewing.

I think I might have liked it still better on my third viewing -- maybe even pushing 4.5 stars, especially with my increased tendency to give out such a rating these days.

And suddenly Christopher Nolan has unwittingly given me a reason to watch Dunkirk again.

You may recall that I am not high on Dunkirk, if you read this post. And in the aftermath, especially on my podcast in which I was the only one not giving the film five stars, I rejected the notion that it would or could improve significantly on a second viewing. I should rephrase that. I didn't reject the notion that it could improve, but that a second viewing was required to fully appreciate it. I laughed at this, as any film that cannot convey its greatness on a single viewing is, in some fundamental way, not great.

But I am starting to think of Inception as a great film, even though it has taken me three viewings to get there. The third time was also the charm with 2001: A Space Odyssey, on which I was still not sold after a second viewing when I was 27 years old. I could get not getting it when I was only eight, or however old I was the when my dad took me to it, thinking I would react to it like I did Star Wars, but 27 should have been old enough to really love it. As it turns out, I didn't really love Kubrick's masterpiece until two days after my 40th birthday, which was the third and most recent time I saw it.

Why not the same with Dunkirk?

I guess the answer is, there has to be a kernel of something in a movie that makes you want to keep coming back to it. You can not get a movie, and be frustrated by the ways you don't get it, or you can just not get it and not want to have anything further to do with it. I suppose this last is me with Dunkirk.

But then again -- and I didn't really realize this until this viewing -- the structural tricks Nolan is doing in Inception are actually pretty much the same tricks in Dunkirk. The way time slows by a factor of 20, I believe it is, depending on the level of depth down into the dream is very similar to the way Nolan has three overlapping Dunkirk time periods whose action is either compressed or expanded depending on the story.

See the thing is, I didn't actually realize that's what was happening in Dunkirk when I saw it. Yeah, I saw that there were three title cards introduced by numerals near the start, and then a time period listed below. But, dummy that I am, and someone who didn't read any of the hype leading up to it, I didn't understand what that structure was actually doing while I was watching it. This core failure to meet the film on its own terms, unwitting as it may have been, could seriously have detracted from my appreciation of it. And yeah, the way I was much derided by my podcast mates for drinking four glasses of wine before my screening could indeed have manifested itself in this fundamental misunderstanding.

I don't think I will seek out Dunkirk on my own before the end of the year, but there is a chance I will see it again before ranking it, and that would be if my wife, who failed to see it in the theater, feels compelled to prioritize it on video. I may even go so far as to plant the idea in her brain, secretly, to try to make her think it was her own (ha ha).

I won't go too much into the details of Inception because there are so many, and that's one thing I do want to say about it. I once criticized, and do still sort of criticize, Nolan's decision to start on a failed example of a "mind heist," one that already introduces the dream-within-dream logic, when it would have been more conventional and more straightforward to introduce us to this world via a successful heist. I now realize, though, that Nolan had so damn much to do that he couldn't afford even ten minutes on an opening successful heist, before the botched one that sets the plot in motion. In truth, it's a miracle he was able to fit his every strand of an idea into two hours and 28 minutes, even as it. It's truly a notable narrative accomplishment, especially since there are very few loose ends and everything calls back to something we learned earlier. Not everything may make total sense, but there are no obvious cheats, no points at which something pops up just to write the plot mechanics out of a corner.

Finally I wanted to mention three other movies that came to mind as I was watching it, none of which I believe I'd thought of on previous viewings, though I clearly should have. The most obvious is probably The Matrix, with the obvious visual echo of the group of people hooking themselves up to enter into a world that can be bent and shaped and where normal physical rules don't apply. But there's also The Cell -- and yes, it's the second time I've been reminded of The Cell this weekend, after It, which just goes to show you how awesome The Cell is. That's another film where people willingly enter someone's mind in order to fight their projections and extract information from it. Finally and perhaps least convincingly, I also thought of Flatliners, though I suppose that's primarily because I just saw a trailer for the remake when I was at the movies on Friday. Though this too includes "going under" to fight demons and dream-like figments of a person's memory and subconscious.

Okay, now that I've got the burden of themed titles out of the way, it's on to night two of Cat's 2.
Posted by Derek Armstrong at 12:46 AM