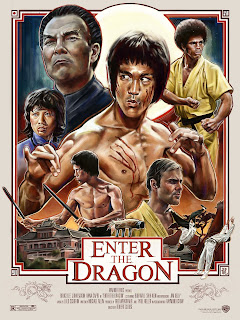 This is the ninth monthly installment in my 2017 series Asian Audient, in which it should be fairly obvious the types of movies I'm watching just from the name of the series.

I had gone this far in my life without seeing a single movie by one of the great cinematic icons of all time, Bruce Lee. It was long past time to rectify that, and this series gave me a good opportunity, but it was perhaps not quite the oversight I originally thought it was. Instead of having dozens of movies I had missed seeing, the man had only five, I was surprised to learn, before dying of an allergic reaction to pain medication in July of 1973. Five in which he does the things he's celebrated for doing, I should say, as preceding that was a career in roles that didn't depend on his fighting skills. In terms of martial arts roles, it was only five. I suppose he's a bit like James Dean in that way -- he made a big impression in a comparatively short amount of time.


Of these five, I was then sort of surprised to learn that Enter the Dragon was his final completed film, though one he started came out five years after his death (Game of Death). As the only title I would have immediately associated with Bruce Lee, it seemed more likely to be the film he released at the height of his heyday. But ah, he was at the height of his heyday when he died -- it's not like, at age 32, he was already winding down. Enter the Dragon was, in fact, released after he had already died, giving it something in common with The Crow, the film his son Brandon died while making some 20 years later.

Needless to say, for legitimate cinephile reasons and many other reasons, I was glad to finally get a Bruce Lee film under my belt. But I sort of had to cheat to do it.

When I set out on this series, I had a fairly specific idea of what constituted an "Asian film," even though there were thousands of films that would adhere to that standard. It could be anything from any country, but one thing was clear: It needed to have been made by Asians, starring primarily Asians, set in Asia, and spoken in an Asian language.

I broke at least one of those rules to watch Enter the Dragon, but it was totally unwitting.

As I did not research Enter the Dragon before watching it, I had no notion that a wide variety of Lee'c co-stars were westerners, and even more troublingly, the film was in English. At first I thought it was only dubbed in English, as it was clear the dialogue was done in post. But I noticed that the dialogue was always matching the shapes their mouths were making, so it was shot in English (but without sound), and then recorded in English by people who could probably enunciate their dialogue a bit more clearly than the Asian actors, or possibly by those actors themselves.

At first I tried to switch the spoken language to Chinese, but the option did not exist on the BluRay. I could hear French, Italian and a couple others, but not Chinese. Which I guess makes sense, as the film was not actually recorded in Chinese, so why make it available on anything but the DVDs that are specifically tailored to a Chinese-speaking audience. When Lee's western co-stars started appearing on screen not long afterward, I realized I was watching a movie that was made in English and seen by most of its audiences that way. It was also directed by an American, Robert Clouse, and what's more, I realized that it was one of only two of Lee's five key works that was in English.

Not exactly what I was going for in this series, but it was an honest mistake, and with only a few days left in September, it was too late to switch to another option for the month.

Besides, I really wanted that Bruce Lee movie.

I ended up mostly happy with the movie, at least with Lee's contributions. And I loved that it was kind of a blaxploitation crossover, featuring Jim Kelly as a wiry African-American with some percentage of Lee's skills. I did wish it had gotten to the action sooner and a bit more regularly. There's a fairly dead portion of the first hour which contains few set pieces and squanders a lot of time on development of the spy plot in kind of uninteresting ways. It didn't totally lose my attention, but let's just say I was distractable. I wasn't totally following the plot at all times, though I was also aware I didn't need to be in order to get the essence of why it's thought of as a classic.

And most of that comes down to Lee's performance in the last 20 minutes of the film or so, first in the scenes in which he's fighting hordes of oncoming minions, and then in his final showdown against the "Big Bad," who keeps on marking him with the three parallel slashes of his Wolverine-like claw.

I guess I wasn't 100% certain why Lee was such an icon, but I was pretty sure it had to do with him being that much more badass than the next guy. The ending really showcases that. Not only do we get all the Lee in-fight vocalizations, which seems to be where my friends and I probably culturally inherited our tendency to say "hi-YA!" when pretending to be martial artists, but we get the quick snapping and whipping of his moves, his brutal takedowns of opponents. While much of the choreography felt in line with what I've seen in many other similar movies, there was one shot that really drew my attention to something distinctive about Lee's moves -- whether it was warranted or not. In this shot there's an opponent with his back to the camera, and as Lee kicks him, he wipes him off the side of the screen quick as a flash, like so much insignificant trash.

The guy was badass, no doubt, and I look forward to seeing more of his films. Even though this is his most famous, and pretty much all the posters I've ever seen of Lee come from here, I suspect his Chinese language films have a bit more authenticity and credibility than Enter the Dragon. I'm not going to say you can see its Hollywood influences, especially not by today's standards, though I suppose then you probably could. I do suspect that particularly The Big Boss, Fist of Fury and The Way of the Dragon would conform a bit more to what I thought I was looking for from a Bruce Lee movie. I wasn't looking for or expecting the 70s cheese on display here, though I did appreciate it on some level in its own right.

I wonder how it must have been for American audiences just becoming acquainted with Lee in Enter the Dragon, to know that he was already dead. Surely many of them would have seen his earlier films, but often a foreign actor doesn't come on Joe Blow's radar until he makes a crossover film, and this seems to have been Lee's first real crossover. The sense of lost and wasted talent must have been akin to my thoughts upon first seeing and falling in love with The Crow, particularly Brandon Lee's performance ... and then realizing I would never see another one.

Okay, it's Halloween next month, and to celebrate the occasion I expect to return to Japan for the fourth and final time in this series with Ringu.
Posted by Derek Armstrong at 12:17 AM

Glad you had a chance to watch this one. It's one of my all-time faves. By the way, western audiences were familiar with Lee before Enter the Dragon thanks to his work as Cato on The Green Hornet. Great write-up.

Thanks Wendell. I wish it had landed a bit more solidly for me, but everything related to Lee was awesome. And yeah, I am clearly not much of a Lee scholar -- I have not seen any Green Hornet but the Seth Rogen version, though if pressed I might have been able to tell you that Lee played Cato.