Cat's Away 2: The passion of many Christs 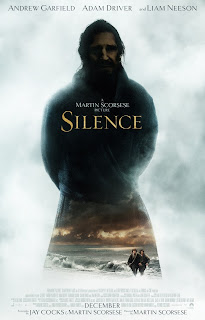 Night 2 of watching (at least) a movie per night while my wife is out of town.

Silence mightn't have been something I would have prioritized for this festival, except that I only had 13 days remaining of a 30-day iTunes rental, and when else but when I have no other viewing on the docket that evening do I get the chance to watch a two-hour-and-42-minute movie?

I didn't consciously realize Martin Scorsese's latest was that long, but of course I should have, because he's Martin Scorsese. Even his children's movie (Hugo) was two hours and eight minutes long. And so as it crept past 8:30, and I only finally checked its running time, I smacked my forehead. Finishing the movie did require three ten-minute naps, meted out through the timer function on my phone, but somehow I got there before the stroke of midnight.

I was incredibly bored for the first hour, but I did become increasingly more interested as it went along. Ultimately, though, I can give it no more than a lukewarm recommendation because I find that it is as merciless in its pursuit of Catholic ideas as Mel Gibson's The Passion of the Christ, although probably a lot more watchable.

I don't think of Martin Scorsese as a man driven by religion in the same way that Gibson is, but it's clear that he is, as he keeps returning to the subject of faith throughout his career. Sometimes I have found this profound, as in The Last Temptation of Christ; other times a bit more tedious, as here. But he continues to explore this regularly enough that I kind of feel like saying "Enough already, Marty." In part because I do feel like it is more of an affectation, an unwarranted thematic preoccupation, than a driving force as it appears to be for Gibson. (Not that this makes Gibson any more privileged in this discussion, I assure you.)

But one of the objections I had to Silence was the implication that the Japanese were unduly villainous in their persecutions of 17th century Christians. No, we wouldn't really want intolerance of belief anywhere, at any time, and certainly, murdering people for their beliefs is not cool. But we're talking the 17th century here, not the 21st century, when barbarous methods were a lot more par for the course.

My real objection, though, lies in the fact that the film seems pretty convinced of the righteousness of the Jesuit priests and their cause -- that cause being the spread of Christianity. Imagine you had a religious tradition that was nearly 1,500 years old (as Buddhism was in Japan), and then some uppity Europeans came in with the express purpose of convincing anyone who will listen -- and if possible, everyone-- that another series of core beliefs about the fundamental nature of the existence of everything are more valid. It'd piss you off, too. What right did these interlopers have? Killing them might not have been the best option -- killing them sadistically, even less so. But these johnny-come-latelys had to expect some kind of reaction.

Scorsese would not say, of course, that the film is on the side of the Jesuits. He would characterize the film as the struggle of true believers to keep their faith, and how faith can be so strong that it overpowers the idea that any other interpretation of the world might be valid. Such arrogance is not even arrogance when you believe something that strongly, the film argues. "What's true doesn't change even when you change your geography," says the priest played by Andrew Garfield, paraphrasing. And what they believe to be true can't be wavered from, even at the cost of their lives. Unless, of course, it can, and that's the film's real debate.

But the film really does seem to relish making the Japanese into mustache-twirling villains, the kind who not only see torture and murder as the best means of accomplishing their goals, they also seem to enjoy it. How can the film not be on the side of the Japanese Christians who are tortured for trying to maintain their beliefs, with these monsters existing as the only other option?

Then there's the problem that the only Japanese character we get to know well is a man who is as venal as they come, a believer who wants to be a good person, but continually sells out his comrades and his belief system to save his own skin. He does this so many times that I lost count, each time asking for forgiveness. Of course, he's not the only example of Japanese characters we see, as there are the uncompromising faithful, in addition to the villainous tyrants -- but the uncompromising faithful don't tend to live long enough for us to really get to know them. So then, by necessity, we get to know best a survivor who is constantly asking for absolution for his sins, and the monsters who force him to commit those sins in the first place. The sheer number of times he asks for forgiveness almost operates as an indictment of the core tenet of Christianity, that a genuine desire for forgiveness and acceptance of Jesus as lord and savior is enough to save one from damnation. If this guy can be saved, repeatedly, the whole thing is a bit of a joke. If this film's saying that, I think it might be the most interesting thing it's saying.

That said, there's enough to chew on here that I did eventually come around on it. But the comparisons to Gibson and The Passion of the Christ don't really end with the Christian subject matter and the idea of suffering. Like Gibson did, the film lingers on the suffering inflicted on those uncompromising faithful, particularly the corporeal aspects of it. The scenes that function as set pieces here are the various forms of torture inflicted on the Christians, from beheading, to drowning crucified victims in the rising tide, to burning them alive, to holding them under water while their arms are pinned, to standing them on their heads for hours at a time. How many passionate, suffering Jesuses can one movie have? I suspect all this stuff is based in historical accuracy, but after a while it seemed a bit much -- I got the sense that this all could have been conveyed equally effectively, in fact more effectively, running 45 minutes shorter.

As my schedule starts to take shape in my mind, I've got two more nights in a row of more than three hours of movies each ... I'm already looking ahead to some comparative relief on Thursday night.
Posted by Derek Armstrong at 4:03 PM

Labels: cat's away, martin scorsese, silence, the passion of the christ