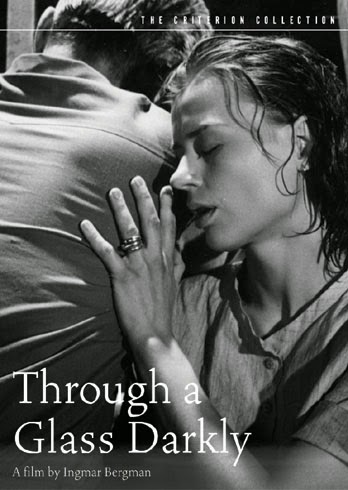 As I recently told you, I have been loaned five Bergman movies by a friend who needs them back relatively quickly. He's placed no deadline on the return, but it's implied, I think, that I am going to make a good faith effort to watch them with at least a moderate level of urgency. (This is a guy who has seen over 8,000 movies, more than double what I've seen in maybe ten fewer years, so his pace is a tad different than mine, and I'm desperate to keep up.)

So I've made a commitment to watch about one every fortnight -- for you Americans, that's a British/Australian term I'm borrowing that means "two weeks" -- and then quickly include my thoughts on the film here.

First up was Persona, which I wrote about here. (Actually, Persona got the short shrift -- I had to introduce the Whole Lotta Bergman series, and spent the lion's share of that post doing that.)

Now I've made my way to Through a Glass Darkly, as I will go chronologically from here. Made in 1961, this is the earliest of the ones I have remaining.

Referred to as a "chamber piece," Darkly features just four characters on the island of Faro -- which I understand becomes a recurring setting in later Bergman films. Its contained location and small character count made it an obvious contender for the stage -- though strangely, that only happened for the first time four years ago, when the movie was nearly 50 years old.

The main character is Karin (Harriet Andersson), the daughter, brother and husband of the other three characters (Gunnar Bjornstrand, Lars Passgard and Max von Sydow, respectively). The four seem like they haven't a care in the world when the film begins with them scampering in from a quick dip in the sea, laughing and shouting to each other. Little could be further from the truth. Karin has just been released from an asylum, where she was being treated for the all-consuming effects of schizophrenia. The other characters are all naturally distressed about what has befallen the beautiful Karin, but they have very different ways of handling it. David, her father, has both run away from it (he has just returned from a long trip, and plans to make another) and been perversely drawn to it (he has been compelled to document her condition as fodder for his writing). Minus, her brother, loves his sister, but is also sexually frustrated and is especially susceptible to the teasings and provocations brought on by Karin's disease. Martin, her husband, comes closest to pure support that comes without preconditions. Over the course of 24 hours on the island, the characters must assess in their own ways whether they think there is any possibility that Karin can be cured -- a near medical impossibility, as David discovers -- and what they will do about that.

As many if not most Bergman films are, Through a Glass Darkly is a case of the auteur grappling with his feelings about God. Conscious of her own condition and eventually conscious of its inability to be cured, Karin latches hold to this idea that God is behind the wallpaper in the attic of her father's summer house on the island. She feels that if she can only hear what God is saying to her, she will be saved. I've written before, when discussing the works of Carl Theodor Dreyer, that it was clear that Bergman was influenced by his Danish predecessor, and Through a Glass Darkly seems to be one of the most direct examples of that. As Karin is rendered into a kind of simpleton through her disease, she seems to be a clear echo of the character Johannes from Dreyer's Ordet, who has also lost his sanity and believes he is Jesus Christ.

Bergman's other key obsession is, of course, mortality, as one character speaks of having attempted suicide and been saved by a kind of divine intervention. Death hangs around this movie almost as much as it (literally) hangs around The Seventh Seal, as the unspoken question surrounding Karin seems to be whether she would be better off dead than suffer through the extreme emotional turmoil of her condition. Her own actions veer toward the suicidal, and we wonder if learning that her condition is incurable hasn't unleashed a death wish that will soon be achieved -- either within the running time of the film or soon after.

As striking as this film is in many ways, it may actually be my lowest rated Bergman film at only 3.5 stars. That of course speaks to the overall strength of his filmography more than anything about Darkly in particular. Darkly may actually be a four-star movie (or higher), but it's suffering a bit from my ongoing reevaluation of which movies get which star ratings. In all probability, Bergman is the type of filmmaker whose every film deserves at least four stars.

The reason I'm inclined to rank this one "lowest," as it were, surely has something to do with the fact that I had to finish its last hour between midnight and 1 a.m., using all kinds of artificial stimulants (purely of the food and drink variety) to keep myself awake. I also think that now that I'm becoming more familiar with Bergman's themes, it's easier to recognize which films I consider major considerations of those themes, and which minor. Just because Through a Glass Darkly seems relatively minor in the grand scheme of Bergman, though, doesn't mean it's not powerful and memorable in its own right.

I've discovered that Through a Glass Darkly is the first in an informal spiritually-themed trilogy that includes Winter Light and The Silence, both of which are also borrowed from my friend. That means Winter Light is up next, which is appropriate as we get into what's supposed to be the coldest month of the Melbourne calendar.

1001: A Film Odyssey is produced, directed and written by Chris, a librarian. said...

Watching a lot of Bergman films in succession like you are doing is the best way to do it.

I am impressed by the quality of information on this website. There are a lot of good resources here. I am sure I will visit this place again soon.
news4andhra.com is a Cine and Political News Portal provides Telugu cinema news and Latest Telugu Movie Reviews

Yeah Chris, it seems like that's the case. Looking forward to the next one.