No Audio Audient: The Sheik 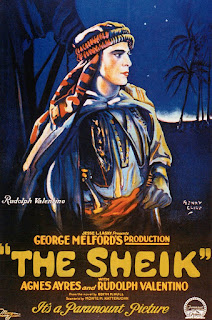 This is the seventh in my 2016 monthly series watching silent films I've never seen.

I understand Rudolph Valentino to be legendary for his suave screen presence, but in the first film of his I saw, I just thought he was pervy.

That's how he comes across for about the first half of The Sheik, George Melford's 1921 epic romance.

In regrettably backward fashion, Valentino's titular sheik captures an English singer, Diana (Agnes Ayres), while she's on horseback in the desert outside of Biskra in Algeria. In that backward time, you might say she "had it coming" by having dressed up as an exotic local dancer in order to gain entrance into an Arabs only casino where Sheik Ahmed was being entertained. During that time, she bewitched him and he got his mind set on capturing her when she went out into the desert on a trip to some remote villages.

If this behavior weren't creepy enough, though, Valentino makes it more so by the broad acting style that made him seem unlikely to transition successfully to talkies (if his death hadn't come before talkies did). Valentino's eyes are never more than a few moments away from bugging out, and it's even worse when they bug out in a way that is pregnant with innuendo. He spends a lot of time sneering and looking at Diana lasciviously, which makes it seem impossible that he will ever become the story's romantic hero.

Which of course he does. It is ultimately a Beauty and the Beast tale. Ahmed captures the beauty against her will, and she naturally rails against her captivity initially. Of course, the more time she spends, the more he has the opportunity to demonstrate some grace and kindness, and eventually she falls in love with him. And by "eventually" we mean "suddenly." It happens rather quickly that her Stockholm Syndrome turns her from prisoner into love interest, though of course that is accomplished by means of this story's Gaston character, a bandit named Omair (Walter Long), who also has designs on capturing Diana but intends to be treat her far less benevolently. And yes, the more traditional heroic aspects of Valentino do start to shine through at this point.

The Sheik is definitely the least technically progressive film I've watched in this series so far. It doesn't really have artistic ambitions with the form. It longs for nothing more than to be a romantic epic and a crowd pleaser. And in this way I did appreciate it, as a relic of another era of entertainment for the masses.

There are of course some significant problems with the handling of the Arab characters, but that's par for the course in 1921. None of the actors are actually Arab of course, but that's the last thing we would expect at that time. The worse problem is the way they behave, even the reformed scoundrel Ahmed. I suppose it's not entirely inaccurate in terms of how women are treated in Arab countries, but a movie made today would try to do better. The thing I thought was particularly funny is that (spoiler alert) at the end it's revealed that Ahmed is not actually Arab, but rather, the son of a Spaniard and a Brit, who died in the desert, leaving the boy to be raised locally by the kindly sheik who took him in. This piece of information arrives so late in the story, and with so little apparent narrative purpose at that juncture, that the only explanation for its inclusion seems to be to mitigate the taboo of Diana falling in love with an Arab.

One detail of the movie I did appreciate, which gives a window into the type of fourth-wall-breaking spectacle movies were at the time, is that as each character gets introduced in the story, a title card appears that also includes the actor's name. Very quaint and cute. You're supposed to be casting a spell on the audience at that point, and drawing attention to the fact that the character is being played by an actor seems to work in opposition to that. But I did enjoy it as a detail about how films were made in the 1920s.

Okay, on to August! I think it's time for me to wade back into the waters of D.W. Griffith. I didn't particularly care for Intolerance, as you might remember, but maybe Broken Blossoms will speak to me a little differently.
Posted by Derek Armstrong at 9:49 AM

Labels: no audio audient, the sheik