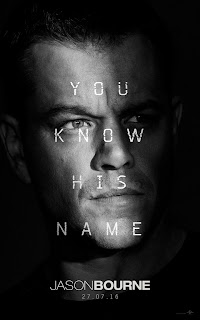 I tried to get myself in the Bourne groove with The Bourne Supermancy, hearing good things about that as well. That also left me non-plussed. It was fine, nothing more.

Since then, I haven't felt the need to watch any more Bourne movies.

And that got me thinking about other series I have abandoned, and that it might make for a fun blog post.

In order to qualify for consideration here, I need to have seen at least two movies in a series and then stopped keeping up with it. I can't, for example, call Madagascar a series I abandoned, because having watched (and obviously not liked) only the original, I never agreed to get on board for the series. There are numerous examples of that. Jason Bourne is a bit different because I came back for more, but still felt myself underwhelmed.

I'm also not including series where I've watched two or more movies, but not in order. I only saw the first and third Friday the 13th, for example. But I can't really say I "abandoned" that series, according to the way I'm currently defining it. I was never really working on it anyway.

Without further ado ... my abandoned series:

American Pie - It probably goes without saying that I didn't follow this series into this umpteen straight-to-video Band Camp movies, but neither did I see American Wedding or American Reunion.

The Crow: Do you count the later Crow movies? I don't really even count the second one, though I have seen it.

Hannibal Lecter: This is a bit of a weird one as the movies made about Hannibal the Cannibal have not had a consistent artistic guiding hand and have seen multiple actors play Lecter. But because I never got around to watching Hannibal Rising I suppose I should include this.

Iron Man - I wasn't opposed to Iron Man 3, but I just never bothered.

Karate Kid - They stopped numbering these movies but I didn't see The Next Karate Kid or the recent reboot. I guess that counts.

Mummy - Wasn't there a movie called The Mummy: Tomb of the Dragon Emperor? Yeah, I didn't see that.

Pirates of the Caribbean - On Stranger Tides was a bridge too far.

Police Academy - Just because I abandoned it a long time ago doesn't mean it doesn't count. I only saw the first two of an eventual 26 of these movies.

Poltergeist - I'm told there was a Poltergeist 3 in a skyscraper or something. Yeah, that doesn't make sense. I did recently watch the terrible reboot, as you know.

Resident Evil - The third one was actually a big recovery from the awful second one, but I still didn't bother to continue after that point.

Rush Hour - Given how much I liked Rush Hour 2, I probably should have given Rush Hour 3 a shot, but I didn't.

Scary Movie - You'd figured I should just keep going if I'd made it as far as Scary Movie 3, but neither 4 nor 5 ever made it into my DVD player.

Scream - Yes, I made it one further in the Scary Movie series than in the series it was parodying.

Spider-Man - Not only did I never bother to see Spider-Man 3, but I didn't see either the reboot or its sequel.

Starship Troopers - There was a third. It was called Marauder, if I remember correctly.

Step Up - Yes, I saw more than one of these movies.

Transformers - I went farther than any self-respecting viewer should go. But I went extinct before Age of Extinction.

Up series: Okay, including this one as a bit of a joke. I fully intend to get to 56 Up but haven't done so yet.

So quite a few.

Will I get back to some of these? Probably. But let's just say I haven't made it a priority. Nor have I made X-Men: Apocalypse a priority, but since I know I will see it before the end of the year, I didn't see it fit to include it here.

In truth, we'd probably all be better off abandoning more series. If we watched fewer sequels, collectively, we'd probably get more original content.

Hollywood gives us what we demand, and if we don't demand much, we don't get much.
Posted by Derek Armstrong at 10:55 AM