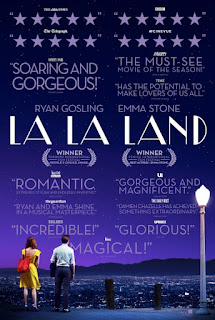 The unlikeliest movie for me not yet to have seen is La La Land, one of the most acclaimed films of the year, the winner of the Golden Globe for best musical or comedy, and the likely frontrunner for best picture at the Oscars.

I'm hoping to finally address that tonight, but at this point, I still can't be sure.

The reason it's unlikely I wouldn't have seen it is that it wasn't one of those movies with an interminable delay before its Australian release. It came out here December 26th, more than three weeks ago.

Of course, I haven't been in Australia during those three weeks. And in the U.S., I had other priorities.

But it's been so long since it came out that I'm now limited to seeing it in certain theaters, as its initial two-week window, where I can see it at any theater, has already elapsed. This isn't a fatal problem -- there are still at least four different convenient theaters where I can see it, and it's certainly not leaving them anytime soon -- but it does represent a funny circumstance for a film that has been one of my most anticipated ever since I learned of its existence early last year.

There was actually discussion of seeing it in the U.S., even though I'd have access to it back here once I returned. My wife actually did see it, as a special afternoon outing on our second-to-last day of the trip. But on the night we would have seen it together, New Year's Eve, we couldn't find a workable screening time, so we opted for Passengers instead.

There's no doubt I will see it in the next week before my year-end list is due. But there are a couple doubts as to how much I will be in a position to appreciate it.

1) After more than six weeks of hype following its earliest release dates in the U.S., is there any hope it can live up to my expectations?

2) Is there any chance that jet lag won't overwhelm my experience of viewing it?

The first problem is one that cannot be helped. You have only limited control of how quickly you can see a film, unless you're willing to pirate it from the internet, which I am not. I could have seen La La Land three weeks ago, but even then it was still burdened by three weeks of intense hype, as well as the festival hype that preceded it.

It's number two that I am trying to control, that has already caused me to delay my viewing twice.

Eager to start seeing the possibly as many as five movies I still want to see in the theater before my list closes a week from today, I considered a La La Land screening for Sunday night. I did have a good night's sleep on Saturday night, almost inevitably after less than three hours of sleep in the previous 36. But by Sunday night I was incredibly groggy and out of sorts again, and besides, I felt that asking to go out to a movie on our first full day back would strain my wife's already fraying patience regarding my obsessive pursuit of movies at the end of the year.

Sunday night I lost the sleep battle at about 9:30, which should have been fine. That was 15 minutes later than I'd lasted on Saturday night. But I was awake again around two, and I can't tell you how much I actually slept between two and five. Some, to be sure. But the sleep was light and feverish, beset by indecipherable stress dreams (I was probably a tad nervous about returning to work after three weeks off -- would I even remember how to do my job?). I did finally steal some sleep at the end of the night/beginning of the morning, but I knew I'd be wrecked yesterday at work.

I did okay, actually -- I even had a new starter sit and train with me for half the day, which was all the more difficult when the phone wasn't ringing and we had to make small talk. But I acquitted myself rather well. Still, by late afternoon I knew any Monday night La La Land screening would be compromised. In my mind I was already postponing it again.

I intentionally stayed up past midnight, to force myself to have a good night's sleep out of sheer exhaustion. I not only watched Kate Plays Christine, which was nearly two hours long, but I even updated a number of my movie lists that had fallen behind during my trip to America. This took me to nearly 12:45.

But did I sleep well?

More stress dreams, actually -- this time a weird mix of fears that I had not fully taken advantage of Disneyland and fears that I had not fully taken advantage of my time with my family. The dreams had something to do with meeting my kids' grandparents at Disneyland but no one being interested in doing anything, and why had we wasted so much money. Anyway, the end result was that I slept fitfully, and the sleep pretty much ended when my older son joined us in bed between five and six, ultimately forcing him and me to get up just after six. (Which may pay dividends at his bedtime tonight, though that doesn't feel like much consolation at the moment.)

It's going to be another rough day.

So do I postpone my viewing again tonight?

I could. I still have eight more nights to see it, as next Tuesday night will also be a final option before the Oscar nominations are announced just after midnight my time that night.

But I also want to see Jackie, Lion and The Edge of Seventeen before then, and I don't want to be going out to the movies every damn night. Better start early so I can space them out. Remember what I told you about my wife's fraying patience?

But if something weird or unanticipated happens, and I can't get out to the theater again before next Tuesday at midnight, I want La La Land to be the one film I'll have seen.

I should probably just go tonight, lining my pockets with Cokes and an indecent amount of sugary snacks. But I remember the last time I went to the movies on next to no sleep, which was when I saw Arrival after a sleepless night following the election. I still can't say whether I would have felt more positively about that movie had I been rested, and not burdened by the despair of a loss of faith in humanity.

But that La La Land itch ... it's strong, and it's just getting stronger.

If I don't do a face plant in my soup at dinner, I think I'll go.

At the very least I've got kind of a cool setting arranged. I'll be seeing it at the Sun Theatre in Yarraville, which is a classic movie house from the early 20th century with art deco stylings. It seems like an appropriate environment to be watching a movie that gives classic Hollywood musicals a modern-day update.

I'll wipe the encrusted soup out of my eyes, drink plenty of Coke and hopefully get so lost in the experience that my sleeplessness will feel like a kind of reverie.
Posted by Derek Armstrong at 10:19 AM