The year I lump all Asians together 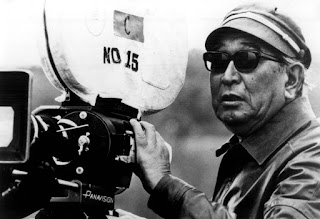 Did I choose my 2017 monthly viewing series simply to continue the alliterative naming conventions of the past few series (Audient Auscars, Australian Audient, etc.)?

Or did I do it just so I could prove I have no ability to distinguish between different Asian people?

Okay, better stop this line of humor now before somebody thinks I'm serious.

In 2017 I will indeed be watching movies from different Asian directors, and I will be calling the series Asian Audient.

As I have already indicated in perhaps questionable taste, Asians are frequently and unfairly thrown together in the same category, despite amply deserving to be recognized for their own unique identities. A Korean wouldn't likely acknowledge much similarity with a Japanese, who wouldn't acknowledge much similarity with a Filipino, except geographically, and, to some extent, appearance-wise. I don't want to contribute to that any more than I need to.

But what led me to group them all together was one of the principles on which I founded this annual viewing series: to watch movies that had fallen by the wayside among my ordinary viewing priorities. And "fallen by the wayside" is the appropriate descriptor here, since I used to watch plenty of films from this part of the world. I'll try to explore why I no longer do a few paragraphs from now.

Sure, I could have devoted an entire year to South Korea, or Japan, or the Philippines (do they have a film industry?). But none of my viewing series have been that specific, except for the one devoted to Australia, for the obvious reason of me living here. If I lived in South Korea, maybe I'd do a series on that.

Devoting a viewing series to an entire continent will allow me more flexibility, to go on a binge of movies from Hong Kong if I want but not be committed to an entire year's worth of them. So don't expect any consistency from me, any kind of premeditated alternating between countries from one month to the next. All I'm guaranteeing is that each of the 12 films I choose will have originated on Asian shores.

I used to love the cinema of Asia, probably watching one a month of my own volition, without a blog series to hold my feet to the fire. Something changed over time, and now I just don't see as many such movies anymore.

And I think that change was: more Asian movies.

Back when I first really became a cinephile, in the late 1990s, we were fed a steady diet of films from China, Japan, etc. -- but "steady" did not necessarily mean "plentiful." In fact, the five or six per year that would break out into enough prominence that they were on my radar were kind of easy to prioritize. I felt like I was really in tune with what was getting made in that part of the world.

Over time, though, and as more distribution channels became available, the lines became blurred about what rose to the level of a film of consequence, and what did not. Now, you might reasonably argue that a "film of consequence" shouldn't be a term used at all, or if so, it should have a personal definition along the lines of "a movie that has subject matter that you personally find interesting."

But especially with these year-end lists that have come to dominate my attentions the last, oh, 20 years, I've wanted to compare apples with apples more than ever before. If I see a movie, I want it to be a movie that other people are also watching so we may compare and contrast our impressions. Participating in a Facebook group devoted to this kind of thing has only increased that proclivity in me.

So over time, I've lost the ability to determine which movies pass this litmus test and which don't. Sure, there are the obvious cases like when someone like Park Chan-Wook or Zhang Yimou releases a new film (though, sadly, I don't think I've seen either of their last films -- it's actually been more than ten years for Zhang, though I'll probably see The Great Wall). But when I haven't heard of the director and I don't know any of the stars? Is it worth watching a movie that might never have "crossed over" in the past, just because it has the distribution channels to become available to me now?

It's all about choices. Now we have too many of them. And so I've been choosing not to watch some of these movies that I might have once watched without a second thought.

I suppose a certain saturation point had also been reached with the kind of wire-walking effects that we first saw in Crouching Tiger, Hidden Dragon. The first few features that contained that were magical. Over time, it became sort of old hat.

And I need to start seeing more of them again.

I won't limit myself by time periods, just as I won't limit myself by countries. In fact, I may go all the way back to the silent era. When I saw the Yasujiro Ozu silent film I Was Born, But ... for last year's series, part of me almost wished I were saving it for this year's. But then, I don't need to be saving anything for anything when it comes to the movies from a whole continent. I've got plenty of options. And yes, you better bet there will be at least one Ozu film in this series, as will there be from Akira Kurosawa, pictured above because of how much I love his work.

I won't make any explicit attempt to distribute my choices fairly between countries, but I will try to go to some unexpected places -- like the (possibly non-existent) cinema of the Philippines, or more likely, exposing myself to one of the older works of Thai director Apichatpong Weerasethakul, whose last few were the first few I've seen.

The sky's the limit. As long as it's an Asian sky.

And I'll be getting started this very month. I've got to focus on 2016 films until the 24th, but I'll commit to watching my first Asian Audient movie sometime before the 31st.

What will that be?

Actually, I've got some idea -- I've been keeping a list -- but I can't figure that out now. At this point, I'm still stuck in the present and (mostly) in the western hemisphere.

But soon, I will be returning to Asian shores once again.
Posted by Derek Armstrong at 9:03 AM