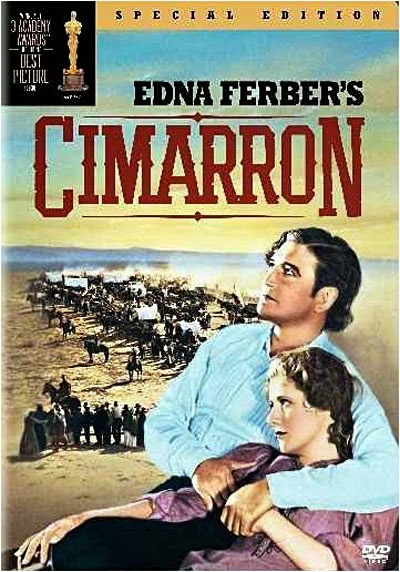 This is the second in my 2015 series in which I'm crossing a bunch of best picture winners I haven't seen off my list, month by month.

When I posted in a Facebook film discussion group that I had started a 12-month journey to watch most of the best picture winners I hadn't seen, and mentioned that The Broadway Melody was not necessarily such an auspicious start, someone responded "Just wait until you get to Cimarron."

So there were no high hopes involved in sitting down Thursday night to watch the 2-hour and 4-minute movie on the last weeknight before the end of the month. I could have still watched it on a weekend night, but why ruin one of those with this kind of drudgery?

Well, characterize me as very pleasantly surprised by the 1931 best picture winner.

Yes, it was long, and I'd be lying if I said I didn't have to take a couple naps to finish it. That speaks more to the current mode of my existence than to any quality concerns with the movie. In truth, it was a very impressive technical achievement and sort of a moving love letter to the American pioneer spirit.

Cimarron tells the story of the 1889 founding of Oklahoma territory, specifically the Osage region (the same as in August, Osage County), from its literal beginnings. It's hard to imagine a more dramatic start than what happened here: Hundreds of carriages and single riders on horseback were unleashed at an exact moment on a specific day with a gunshot to commence the race, told that whatever piece of land they could claim would be theirs. (Ah, if acquiring property were so easy today.) It follows the fortunes of one Mr. Yancey Cravat (Richard Dix) and his family (wife Irene Dunne and children) over the course of nearly half a century, in which Osage grows from a bunch of carriages and shanties to a bustling metropolis, and all manner of social and sociopolitical growing pains are addressed in between.

Cimarron is a bit like a biopic of a region, rather than a person -- and in so being, is also a bit of a biopic of America. Yes, Dix's Yancey Cravat is its central character, but as he is also a yearning wanderer, he disappears from the narrative for stretches of time as well. Cravat is the personification of many things Americans at the time (and still today) considered to be the founding values of this country: a sense of adventure, a desire to expand, a will to amass wealth and success through personal ingenuity, and a willingness to accept people of all types and backgrounds. There is a prominent Jewish character accepted into the fold, and a former slave boy who also plays a crucial role in the proceedings (even if his handling from a directing perspective is sometimes too broad to leave a person feeling comfortable -- a symptom of that era of Hollywood filmmaking, I'm afraid). The movie also shows a sort of delightful pre-Code refusal to judge people of ill repute, as Cravat (in one of his incarnations as an attorney) defends a renowned prostitute against charges against her. I suppose the bedrock American values are also meant to include forgiveness, as it was this same prostitute who snookered Cravat out of his claim to a particularly choice piece of land back when the first land rush was on.

This gets at just some of the complexity lying underneath the apparently simple surface of Cimarron. When Cravat agrees to defend the prostitute -- in fact, takes up her cause without even being asked to do so -- it's a bone of contention between his wife and him, and it's even hinted that he had an improper relationship with her specifically and perhaps other women generally. I suppose this is part of the restlessness that characterizes Cravat throughout. So while there are many things heroic about the film's portrayal of Cravat -- he also builds a newspaper from scratch, and more or less single-handedly rids the town of a pack of outlaws -- it never ceases to view him with a certain degree of skepticism. It's a complicated portrait that probably would not have been possible when the Hays Code was introduced a few years later and things got a lot more black-and-white at the movies.

One delight is also to see the power that Cimarron hands to Cravat's wife, Sabra, who is portrayed as her own woman and a shrewd capitalist in her own right. When Cravat disappears on whatever ill-advised journey has seduced him, it's Sabra who is at home, presiding over their newspaper and eventually becoming the primary face of its success. Near the end she is even elected into public office, which seems like a terrifically progressive thing for a 1931 movie to show us. As the movie approaches its climax and we have aged 40 years with Sabra and a collection of other familiar townspeople, it's actually a bit moving to recognize how effectively the movie has introduced us to them and given them all little character arcs for us to follow. Cimarron creeps up on you, something that's a bit of a surprise for such a sweeping epic.

I mentioned that Cimarron is also technically impressive. It has numerous scenes that are bursting with extras, and though that was not necessarily anything new (D.W. Griffiths films relied heavily on extras for years), it's certainly a welcome reminder of what we have lost with crowd scenes able to be generated by computer today. And though I understand that the opening land rush, Cimarron's most famous scene, is indebted to a similar scene in a silent movie called Tumbleweeds, that didn't make it any less astounding to me. As those horses and carriages race toward manifest destiny, it gives you a huge kinetic rush, even watching it more than 80 years later.

Here's hoping Cavalcade has as many unexpected treats in store in March.
Posted by Derek Armstrong at 8:29 AM

Don't get too excited for Cavalcade, though.

Cool! I didn't know you had a horse.

As I will officially reveal in my next Audient Auscars, I realized it was actually Cavalcade I was warned against, not Cimarron. I can already feel myself starting to yawn.