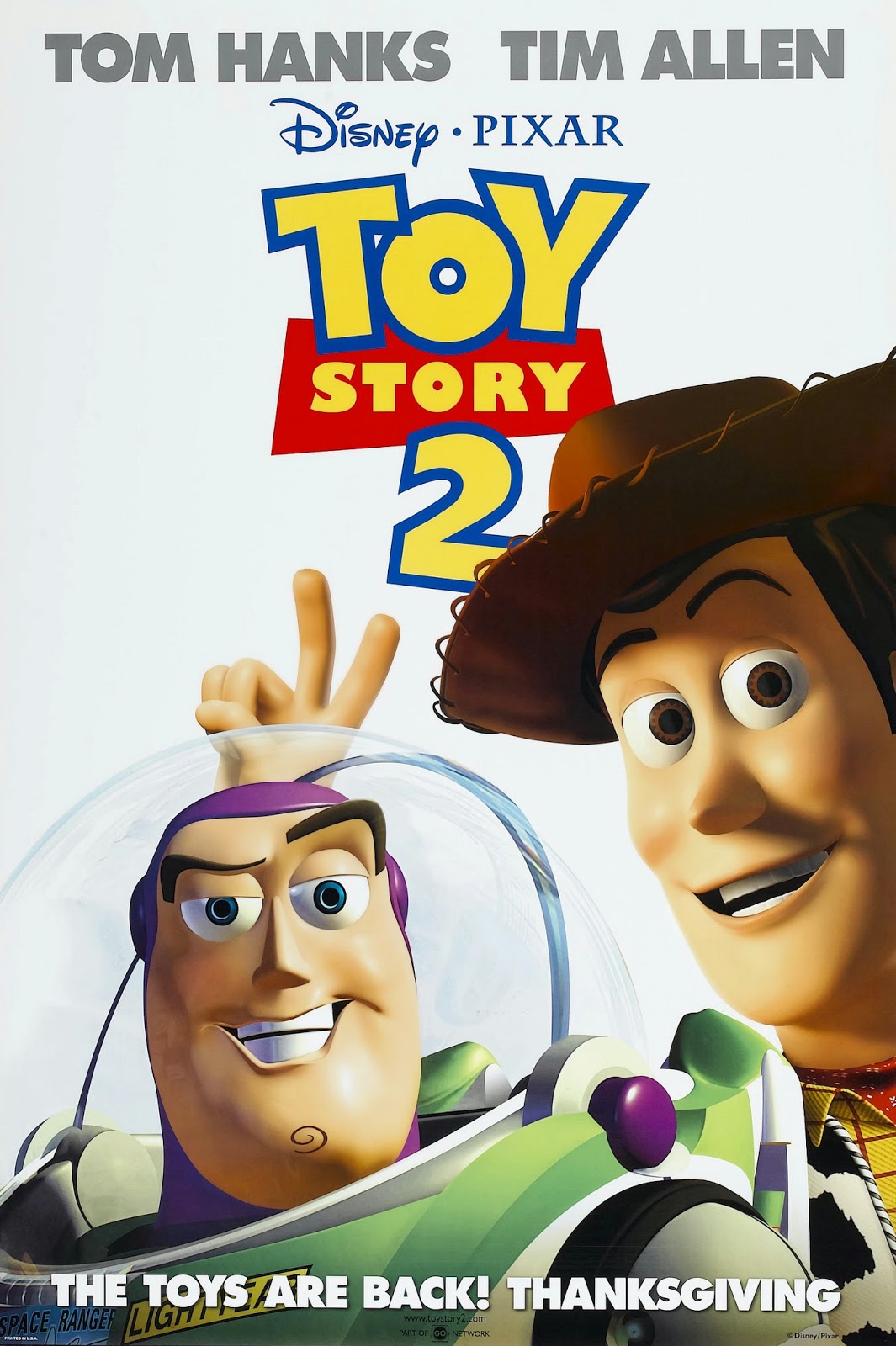 This time, I'm doing things a bit differently by focusing on something much more recent, though still from last century. As with the other two, though, there are a set of clear assumptions I am grappling with, and it's still been long enough since I've seen it that I knew a new viewing would answer some of my questions.

I hadn't seen Toy Story 2 in something like 15 years. My #2 movie of 1999, it was one of those I saw in the theater and then saw on video almost as soon as it was available. I may have even seen it twice on video, possibly as recently as 2001 or 2002. Since then, though, nothing. On the contrary, I'm quite familiar with Toy Story, having received it on BluRay as a gift. That means its total viewings outnumber Toy Story 2 something like 8-2.

In those 13 to 15 years, I've gone from being uncertain if I could distinguish a meaningful difference in the quality of Toy Story and Toy Story 2, both five-star movies, to pretty clearly preferring Toy Story. The best example of that is my Flickchart rankings, which have Toy Story all the way up at #6 overall, and Toy Story 2 as "only" 118th. Further stimulating this consideration of Toy Story 2 was having caught part of Toy Story 3 last weekend when our family was away for the weekend with three other families. The kids were all watching Toy Story 3, and I got to sit in on the emotional ending. It was all I could do not to bust out crying, something that would have been hard to explain to a bunch of five- and ten-year-olds. I started to wonder if Toy Story 3 weren't better than I thought it was -- perhaps even challenging the quality of Toy Story 2.

(Favorite moment from the viewing, though: When the characters survive their close scrape with the incinerator at the end, my son looked up at me with a look of earnest glee and said "They made it!" The others sitting with him, all older, were nonplussed -- or at least were not similarly vocal. I will treasure the time that my son responds to happy endings totally without cynicism or skepticism.)

So when a BluRay of Toy Story 2 popped up at the library last week on a visit with my sons, I gobbled it up. I thought my older son would be especially ripe for a viewing, having just so enjoyed the next chapter in the saga. (And not really getting that he missed a part in the middle.)

I didn't know if I'd actually get to watch it with him, but the opportunity arose on Sunday morning, when he started the day by vomiting on the carpet. Now that he was officially sick, all kinds of previously inexcusable activities were now on the table -- like him getting to watch TV for most of the day, and me getting to plop down with him for the length of a whole movie. (The fact that he threw up twice more during the day removed any question of whether he was truly sick.)

Toy Story 2 is still a great movie, but there are in fact certain things that bothered me during this view, ranging from the minor to the major. I'll list them in no particular order:

1) The writing is not as casually sharp as it is in the first movie. One of the things that makes Toy Story such a pleasure is that its dialogue is almost exhaustingly clever. You don't truly become exhausted by it, of course, but it's densely packed with double entendres and other witty turns of phrase, without ever once feeling overwritten. Toy Story 2 does not feel overwritten either, but a lot of the incidental cleverness is lost, I noticed.

2) The villain -- Al of Al's Toy Barn, voiced by Wayne Knight -- would never fall asleep with an entirely full bowl of cheesy poofs on his chest. They make him out to be so repulsive and corpulent that he would have had to down at least half that thing, especially to get that quantity of artificial cheese topping on his fingers. It's a smart set piece that Woody needs to walk through the fallen snacks like a minefield in his attempt to keep Al from awakening, but I got stuck on the notion of just how many cheesy poofs escaped a fate in Al's stomach. (Remember, I didn't say all my complaints with Toy Story 2 were major ones.)

3) The exact rarity and value of Woody and his pals as toys seemed exaggerated. I'm no rare toy aficionado, but I have to assume that a museum in Japan would have other ways of acquiring a Woody's Roundup Gang without relying on an American toy store owner finally getting his hands on a Woody to complete the set. Also, was this deal perpetually in place, pending the finding of the Woody, so that Al only has to call up the Japanese once he's finally succeeded in his mission? Which happens without any premeditation, during a random Saturday morning yard sale? And even if this Japanese museum is as obsessed with this acquisition as they appear to be, how much could they possibly be paying Al? A couple grand at most? Surely not enough for Al to fly the toys to Japan himself, as if this cost would immediately become a drop in the bucket of the wealth that would soon be his. But perhaps the strangest moment in this transaction involves Al thinking he's gotten the upper hand and requesting that they "add a zero" to the end of what they plan to pay him. So suddenly he thinks the rare toys may be able to sell for ten times an amount he already thought was going to change his standard of living?

4) The toys are capable of too much in this movie. The adventure in Toy Story had the benefit of being life-sized, or perhaps I should say toy-sized -- going outside the house into the neighbor's yard and down to the local pizza restaurant was astounding enough. Needing to up the ante for the sequel, though, the writers had the toys not only get down to the local toy store (that's fine, I buy that an Etch-a-Sketch map copied from an ad on TV could help them accomplish this), but they also drive a car to the airport. Even allowing for the possibility that a team of intelligent toys could manipulate the controls of a car in the exact unison necessary to pilot the thing, how could they then steer it down busy streets and all the way to an airport, following another car quickly disappearing on the horizon? Even stranger may be the explanation about how they got back to Andy's house, which occurs entirely off-screen and is explained only be showing one of those luggage trains parked in the yard across the street. The return from the airport alone, after the primary conflict has been resolved, should have been a harrowing adventure that got all of them killed.

I'll stop at four complaints because look, this is still a Toy Story movie and it's still wonderful. I just might knock my five-star rating down to 4.75 stars ... and my #118 ranking on Flickchart down to 150-175.

How does it stack up with Toy Story 3? I guess I'll need a proper second viewing of that to say for sure.

Join me again next time -- maybe four months from now, maybe sooner -- for another exciting episode of Question Your Assumptions.
Posted by Derek Armstrong at 2:29 PM