Planes for one kid, Cars for the other 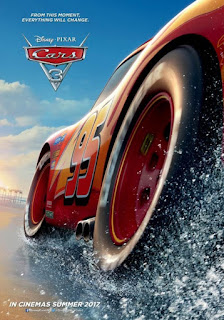 A lot of my contemporaries might proudly talk about how their child's first movie in the theater was a Pixar movie.

I can only sort of do that, and it's not like these movies were Inside Out or Up or Toy Story 3.

Nope, our kids' first "Pixar" movies were a no-Pixar spinoff of what is popularly considered to be Pixar's worst franchise ... and the third movie in that franchise.

However, we couldn't have planned it with any more thematic symmetry if we tried.

In 2013, when he was just a month past his third birthday, we took my older son to the Sun Theatre in Yarraville, where we saw the Cars spinoff Planes. It's clearly from the world of Cars, but it's Pixar adjacent at best, emanating from the dubiously named DinseyToon Studios. You may recall it being discussed in this post. (Or not -- that was four years ago. And if you do recall it, what are you, stalking me?)

On Saturday, about five-and-a-half months after his third birthday, we took my younger son to see Cars 3 as part of an admit four advanced screening at the Village Cinemas in the Jam Factory in South Yarra. (Both towns even have a "Yarra" in them.) His attention span is not great, but the tickets were free, making it a lot more of an inviting prospect. I'm reviewing the movie, you see.

Another common factor: My wife played the role of running interference on both occasions.

The first time, when she had to chase the older one around the theater and out into the lobby for a total of maybe 15 minutes, she graciously deferred to my nearly fanatical need not to miss a significant chunk of the movies I see. (Something having to do with how much of a movie I can miss before it "counts" for my lists.) This time, I had firmer ground on which to stand. We wouldn't have been there at all if I weren't reviewing the movie, and it's my duty to my reading public not to render judgment unless I've seen every last minute. She probably missed about the same amount of time this time around.

As it turns out, both movies were tedious enough that I wouldn't have minded chasing around the kids.

Although I have a soft spot for the Cars movies -- I kind of love the first one and I appreciate the second -- I found this one a real grind. It's out of the spy game and back to the race track, with mostly boring results. I mean, do we really need another Pixar character who is fearing his own obsolescence?

But the big misstep this movie makes is to sideline Mater entirely. Yeah, Cars 2 was too much about Mater, but he was the Jar Jar Binks in Attack of the Clones of this movie -- in it for continuity reasons, but without much dialogue. I never could have guessed how much I'd miss him. But now I'm repeating my review, which should probably be available on a link to the side of the as you read this, or will be soon enough.

The kids really liked the movie, and not only, I think, because of the free popcorn (which would only appeal to the older one) and the free mini Cars toy they got at the gate. Them liking the movie is a lot more important to me than me liking it, since I'm trying to convince the younger one that going to the movies is good, and the older one that going to movies that he considers too babyish is good. (The older one, who whined about having to come at all, later on asked us if we could watch Cars 3 on Netflix. Yeah, that's not how it works, kid. But thanks for the vote of confidence and for providing a perfect example of your own short-sightedness.) I'll worry later about the fact that he thought the villain, Jackson Storm, was the best character.

But I couldn't blame them if just seeing it up on a big screen was impressive enough to win them over. Predictably, it does look great. Funnily enough, considering that this is a series I appreciate, this was my first Cars movie in the theater. I had to have little enough faith in the first two -- the second even after liking the first -- to have waited to watch them on video, and in the case of Cars 2, more than two years after it came out. When I finally get around to seeing one on the big screen, it's the worst one. (Some of you will like it better than Cars 2, or possibly even Cars. Good on you.)

If I'm taking the long view, and the snobbish view, neither kid will have a great answer when someone one day asks them their first movie in the theater. I mean, it can never compare to my own answer: Star Wars.

But who even knows what you would consider the 2017 version of that answer. It could be a Star Wars movie, of course. But in 20 years when they're answering that question, there'll be 15 more Star Wars movies and it won't seem all that special.

Planes and Cars 3 may not be special, and they may only be lesser Pixar and Pixar adjacent ... but they're not bad movies. At least they're good adjacent, and that's good enough for me.
Posted by Derek Armstrong at 10:20 AM