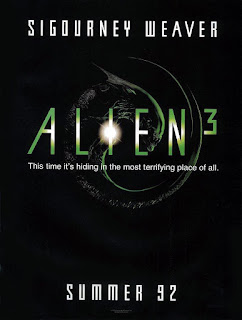 I rewatched Alien 3 (hate that I cannot write this film's title correctly, to the third power) on Thursday night, in preparation for a podcast Sunday night in which we are discussing all the Alien movies. Our emphasis will be on Alien: Covenant, of course, which would have felt a tad more fresh if we'd recorded the podcast two weeks ago, as we were meant to do. But technical difficulties postponed that podcast. I was in favor of moving on to a new movie, but the other two were not. Majority rules.

Anyway, I didn't need to rewatch Alien 3 because we will probably touch on it only briefly, if at all. But I decided to go full bore and also rewatch Alien: Resurrection, a viewing that will be forthcoming tonight. I happen to have seen Alien and Aliens in the last few years anyway, and of course Prometheus is only five years old and I watched it twice that year. (Not realizing until the second viewing that I don't really like it all that much.) So after tonight I will be conversant in all of them in time for tomorrow.

As I was watching, soon after my kids went to bed, my younger instigated one of his multiple bedtime diversionary tactics by asking for more milk. And this was the corresponding pause, which I suppose is a spoiler for a movie that is now 25 years old, so look away if you really don't want to know anything about Alien 3. And the rest of this post will be filled with SPOILERS. 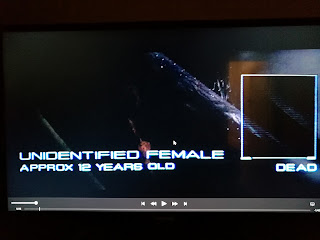 This is the exact moment when Alien 3 announced what type of movie it would be -- the type of movie that repudiates the very notion of happy endings.

So having randomly paused on it -- the inspiration for this periodic series Perfect Pauses -- made me take special note of it this time.

Actually, I've always taken special note of the fact that Newt died at the beginning of Alien 3. Newt, whose salvation gives Sigourney Weaver's Ellen Ripley her entire motivation for strapping on a mech suit and fighting the xenomorph at the end of Aliens. The happy ending of Aliens, then, is entirely eradicated in one stark, chilling on-screen graphic.

Oh but it's not just the graphic. What I hadn't remembered, or possibly did not even notice the first time I saw it, was that you also get a brief shot -- just a second after this pause, the beginnings of which are already visible above -- of Newt's frozen death scream. So not only does the child die, but you also get to see that she died horribly. She wasn't struck on the head or impaled by some support column, like her unfortunate fellow traveler who is revealed as a bloody mess of viscera about ten seconds after this. No, it's possible the girl was actually scared to death.

Yep, and then later they do an autopsy on her body as well. And you actually get to see inside her.

This was not in keeping with my memory of Alien 3 at all, so I guess it's good I watched it again. I thought it had basically been off screen, like "Hey, Newt died," Sigourney Weaver crying for a minute or two and then on with the plot. But not only is there that autopsy, there's also a funeral for her and the guy who got crushed by the support column, before their mummy-style corpses are cast out into space.

It's all pretty hardcore, a real turn in philosophy from what is already arguably a bleak enough series. During this opening we also learn that the beloved synth Bishop (Lance Henriksen) has also been rendered with "negative capability" (chilling phrase) by this crash. Though Bishop does have a momentary comeback later on, in another sad scene. At least he gets a proper farewell.

Happy endings are something we rely on as lovers of film, and Alien 3 has the balls to take all the steam out of them. I mean, you could argue that the ending of Aliens is not a "happy ending" now at all because Alien 3 reveals that it wasn't an "ending" at all. In traditional terms, an "ending" would mean that the people's lives basically progress onward now in a boring state of happiness until they die 50 years later, having lived fulfilling lives. We can only call something an "ending" if we don't know what else happens in the story, and are left to believe that it's all happy (even though life is never all happy). So the "ending" of Aliens is only such because that's where James Cameron chose to stop telling his story. As it turned out, David Fincher picked up the story only like a day later, or however long it took them to crash on that prison planet (and if they were in hyper sleep anyway, then perhaps it only seemed like moments later to them). So not only does Alien 3 invalidate the happy ending of Aliens, it recontextualizes it as not an ending at all.

It takes the perspective of two more decades to recognize just how bold, how unusually despondent, the opening of Alien 3 is, especially in the grand scheme of the cinema that followed. The cold and clinical audit of which passengers are dead (three) and which alive (one) is the kind of shock to the system we just don't get in movies. Alien 3 is one of the weirdest third movies you are likely to see in a successful series, and it's certainly not something you would see today. Screenwriters David Giler, Walter Hill and Larry Ferguson would never be able to get away with killing a beloved child character from the previous movie at the start of the next movie, and they would certainly not be able to kill off the series' main character at the end of the movie, though that of course did not prevent (a version of) Ellen Ripley from returning in Alien 4.

Those kind of ballsy decisions pervade the first half of this movie. As I was watching, I felt myself immersed in a state of awe about how much I had underappreciated this movie. I hadn't hated it, of course, but I had subscribed to the conventional wisdom that the movie was hopelessly flawed, using the death of Newt as one of my primary examples of its wrong-headedness.

This time, I really appreciated the craft of David Fincher, then a nascent feature director (this was his first), but already boasting the wandering camera, perfect framing and moral bleakness of his later work. I love the setup and the choice for this movie's group of "expendables," the prison colony with a skeleton custodial staff of shaved-head religious fanatics. I loved some of the characters within that group, specifically those played by Charles Dutton and Charles Dance, and the leader, who always calls Ripley "leftenant." I loved that Sigourney Weaver spends at least the first third of the movie with a burst blood vessel in her eye, a probably unnecessary bit of realism that in most movies would be rejected by the star purely for reasons of vanity. All of this stuff was conspiring to make this a truly vital and not only underappreciated, but possibly flat-out great, entry in the Alien series.

Unfortunately, the second half of the movie is shit.

I can draw the line pretty much exactly with the (premature) death of Clemens, the doctor played by Charles Dance. Maybe this film just could not handle one more non-traditional narrative choice, but when he's grabbed by the xenomorph about halfway through, in a manner that is typically unimaginative (the deaths are not a strength of this movie), I thought "No, not him!" I really wanted this guy to be around for the finale. But no.

And after that it just progressively falls apart, to the point that Fincher's craft does not even seem impressive anymore.

All that running around in the shafts of the prison underbelly, trying to lure the alien here or there, gets repetitive and is not very impactful. I did not find it interesting at all to view the events from the perspective of the xenomorph, either. But I found it even less effective to view the xenomorph itself. Unless it's in the close-ups involving practical effects -- as in the iconic shot of the alien "kissing" the side of Ripley's bald head -- the alien looks absolutely terrible in this movie. That's because the moments of digital "magic" and green screen place this movie squarely in the year 1992. The alien looks distractingly awful as it scuttles through these subterranean passageways, just because it wasn't possible to make that kind of thing look good in 1992. In retrospect, they should have relied only on practical effects, though I suppose to a 1992 audience those sequences probably seemed reasonably impressive. Today, they are laughable.

And the film's ending, with Ripley's Christ-like back flop into a distant fire pit with the alien bursting out of her chest ... well, first of all, how far down is that fire pit? She seems to drop for no less than 15 seconds. What has otherwise been realistically rendered as a prison on a desolate planet has now become something out of Star Wars, bottomless pits of fire and all. It's all pretty laughable. (It's laughable here, not in Star Wars.)

So I guess my perspective on Alien 3 was not 100% salvaged by this viewing, but I do have immense appreciation now for its first half.

Maybe on my eventual third viewing, that's all I'll watch.

We'll see how my viewing of an insufficiently remembered Alien: Rescurrection goes tonight, post possibly (though possibly not) forthcoming.
Posted by Derek Armstrong at 8:27 AM