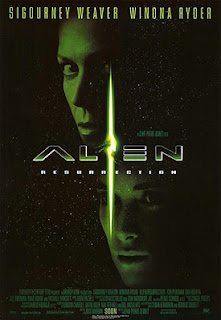 In watching the two most recent Alien films, I've thought that the synthetic characters are the subject of an unusual amount of focus.

Rewatching Alien 3 and Alien: Resurrection over the past few days, I've realized that focus was there all along.

Synthetic life makes only a brief appearance in Alien 3, in the form of a half-version of Bishop being resurrected (Synth: Resurrection?) for about five minutes, but it makes its return in a big way in Alien: Resurrection.

At first I thought it was Ripley herself. As the movie is 20 years old now and I only saw it when it first came out, I thought for a moment that the Ellen Ripley we get in this film is some kind of synthetic reproduction of Ellen Ripley. Then of course I remembered that she's actually a clone. Tom-ay-to, tom-ah-to.

But the actual synth in this movie is played by Winona Ryder, who displays nary a moment of synth-like behavior in the whole movie.

My first instinct is to blame Ryder, by giving her the counterintutive criticism that she has too humanistic instincts as an actor to play a scene robotically. However, I then have to realize that the synth we're seeing in this movie is 200 years more advanced than Bishop, the last synth we've seen in the timeline. Bishop is clearly robotic, but he's supposed to be an advanced model of Ash from the original Alien, who is human enough to pass for human to the rest of his crew. Maybe we really only know Bishop is a synth because the crew knows it from the start, so there's no surprise.

I guess my point of comparison, then, in criticizing the way Ryder plays a synth is Michael Fassbender from the new movies, an impossible reference point for Ryder when researching that performance. And of course, Fassbender is less sophisticated as a synth than Ash, not quite able to pass for human (unless it's the "evolved" David rather than the compliant Walter, I suppose).

In other words, synths have been nearly passing as human for almost the entirety of their existence, so why should I be concerned about Ryder's inability to pass as a synth?

I guess it's just that I feel like there should be something in her performance that signifies that she's not human, and I just don't see it. Even if the point is that synths have grown in sophistication to the point that they are effectively more human than human, especially among a group of rogues and mercenaries, I still want to see a creative choice in Ryder's performance that demonstrates her "otherness." And I just don't see it.

Maybe I should "blame" Jean-Pierre Jeunet?

In transitioning to my next "thought," I'll say that I like that Jeunet brings his own distinct touch to this the same way that Fincher brought his to Alien 3. If I was noticing the slowly creeping camera, the perfect framing and the moral bleakness of Fincher, then I'm noticing a more frenetic, whipping camera here that favors the zoom in to a sort of "grotesque" close-up. Also, some much-needed humor after the extremely dour Alien 3. Jeunet also brings with him a cast of regular collaborators (Dominique Pinon, Ron Perlman) who both fit perfectly into the Alien world. There's a sort of cyberpunk quality to Jeunet films like Delicatessen that also naturally translates to this world.

As I suspect we will discuss in our Alien-themed podcast tonight -- I'm writing this on Sunday but will publish on Monday, after we've recorded -- the Alien franchise makes interesting raw materials for any director to leave their own imprint. There are series where the sensibilities of any particular director are purposefully muted -- I'm thinking the MCU -- and then there are series like this where the director is allowed to run with the material, as we saw first with James Cameron in Aliens, then with Fincher and finally with Jeunet.

Which makes it kind of disappointing, then, that in his old age Ridley Scott has gotten greedy and demanded that he alone be the auteur informing the future direction of this series. How much might you like to see what someone like Darren Aronofsky would do with an Alien movie? Or Guillermo del Toro? Or even someone like Kathryn Bigelow, James Cameron's ex?

We will never see these Alien movies, and that's a shame.
Posted by Derek Armstrong at 1:09 PM