Reacquainting myself with The Iron Giant 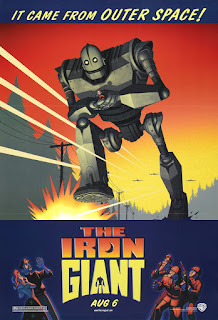 My kids' favorite movie these days is The Iron Giant.

What a marvelous turn of events.

I say that as though I had no role in it, which of course I did. Remembering the success we had with Tarzan (read about that here), I decided to try a "garage movie" with my kids this past Monday, which was a holiday. My wife had some work to do so I was left with the task of distracting them and keeping them out of her hair. I mean, I took them out until the mid-afternoon, but you can't stay out with the kids all day. What do you expect from me, exactly?

They enjoyed the movie, which I'd rented from the library, and I felt a satisfaction akin to "we got through that without any major disruptions to the movie or to my wife." I didn't have any idea it would linger in their consciousness beyond that day.

But boy has it.

My youngest, who is nearly three-and-a-half, has seen the movie approximately four times in the week since then. His six-year-old brother is only one viewing behind him. And in a telltale sign of how much they like it, beyond having watched it multiple times, they can often be heard zooming around the house as the Iron Giant himself after a viewing.

But what's been the most fun for me is how funny they think it is. For all my kids have enjoyed various movies in the past, even watching them on repeat, rarely have they ever isolated lines they thought were funny, and proceeded to quote them unprompted.

They quote two parts of the movie in particular, and they both involve Dean.

And to think there was a time in my history when I actively disliked Harry Connick Jr. 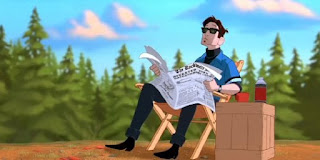 But wait, that's the second part they like. Let's do the first one first.

The first one is when we meet Dean, the beatnik -- probably the only beatnik in this small Maine town -- in the diner. It's a great character introduction, as Hogarth discovers him unresponsive behind his newspaper -- because he's sleeping. We aren't told why Dean is sleeping in the middle of the afternoon at a diner, what aspect of his beatnik lifestyle left him in this shape. I prefer just to wonder.

Anyway, the first thing we learn about Dean is that he's a co-conspirator. He takes an immediate shine to Hogarth, and perhaps because he'd never narc anyone out, he doesn't let on in a way that might get Hogarth in trouble with his mother (Jennifer Aniston), a waitress at the diner.

Let on about what?

When the squirrel digs its little claws into his leg to make the ascent, Hogart's mom is already at the table, so he can't give away the game. Instead he gets this crazed look on his face ... exactly the look you'd get if you were trying to conceal that a squirrel was clambering up toward your groin.

"Call me Dean," he says, through clenched teeth, eyes twitching. They quote that line regularly.

The second part is perhaps the indisputable comedic peak of the movie, when the monkey see, monkey do giant follows Hogarth's lead by doing a cannonball into the lake. Dean is sitting as pictured above, reading the paper in a director's chair, chewing on a toothpick.

Now, the water displacement of a giant metal robot doing a cannonball into a lake -- after a running start, mind you -- is massive. A tidal wave ensues. We don't immediately see what happens to Hogarth, though that's also a great punchline -- he's clinging to the top of a pine tree, cheering. We do see Dean observing the approaching wall of water with stunned horror, and then, not able to think of anything better to do, he hides behind the newspaper. Not for protection, really, but just so he doesn't have to see himself get hit in the face with a tidal wave.

When the water rushes through, and we see various forms of Maine forest life swimming through it, we also see Dean swirl around, still sitting in his chair, as though they were a single fused object. He lands softly in upright position out on a neighboring road.

When the water clears, an old codger in a pickup truck drives upside the dazed hipster and sticks his head out the window.

"Yeah?" says Dean from behind his crooked glasses, not turning.

"You're in the middle of the road!" says the codger.

That exchange is great, and I can get them giggling every time I reenact it. Of course, then they want to reenact it themselves, and reproduce it spontaneously at a moment of their choosing.

I should say there's one other thing they quote that doesn't involve Dean. It's the line Hogarth says to the giant after he's first made his acquaintance, once he realizes the giant intends to follow him home like a lost puppy.

What I like about that is that moment is repeated back with the roles reversed in the film's emotional climax, which I won't reveal until after this SPOILER ALERT if you somehow still have not seen this movie.

When the nuke is headed toward the town and there's no reasonable hope for any of the people present to escape, the giant makes the decision to sacrifice himself by flying up into the stratosphere and intercepting it out of harm's way. And this line is his way of saying goodbye to his young friend.

Yeah, The Iron Giant turned me into jelly again at its climax, even ten years since I last saw it, and for probably the fifth time overall. My older son asked one of those simple questions that shows a true engagement with the material, that he's finally starting to process adult themes, and understanding the meaning of grand concepts like nobility and sacrifice.

"Why is he going to fly after the missile, Daddy?"

"Because he wants to save the people," I choked out, somehow preventing my voice from succumbing to all-out blubbering.

No, it's because I know part of why this movie has resonated with them is because it has a wonderful message that they might not even know they wanted. But it's experiences like this that can give birth to a lifelong love of cinema.

Sometimes I don't like it when my kids start to regularly watch a movie I hold sacred. I don't mind catching snippets of lesser classics every time I walk through the living room, but there are some that should be special, whose shine might wear out with repeated exposure. For this very reason I've been very careful about dolling out access to recent favorites like Zootopia, Inside Out and Tangled.

But it's been a joy to walk through various parts of The Iron Giant, ranked above any of those movies on my Flickchart at #26. Instead of wearing out, it tickles me anew every time I walk by, and if I'm not careful, I might even feel myself getting emotional.

And every time that cannonball scene is on, I make sure to stop and watch.
Posted by Derek Armstrong at 7:38 AM