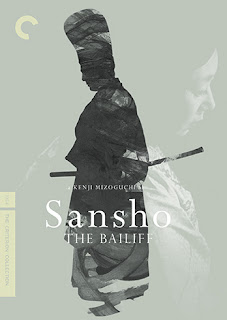 This is the halfway point of my 2017 series watching a movie per month from Asia, and my third trip to Japan.

You'd say that 1954 was a good year for Japanese cinema, except that would tend to overstate the role of Sansho the Bailiff in making it so.

Yes, I was not a huge fan of Kenji Mizoguchi's film, which reached the lofty heights of #59 in the 2012 Sight & Sound poll.

The other Japanese cinematic giant from 1954 was, of course, Akira Kurosawa's Seven Samurai, a beloved favorite of mine that I rewatched earlier this year -- not as part of this series per se, but the night after another Kurosawa film I did watch for this series, High and Low. Samurai did beat Sansho by 42 slots in the poll, but it should have beaten it by a lot more.

As I've had a very busy blogging schedule in the nine days since I watched this movie, creating possibly my longest interim ever between watching one of these movies and writing about it, I may be a bit fuzzy on the reasons I didn't love, or even particularly like, Sansho. That will start with finding a good entry point to discussing it.

But here's as good a place as any. Sansho the Bailiff, strangely, is named after its villain, and not even a particularly charismatic villain at that. In fact, because his name was rarely spoken at the same time that he was actually on screen, I spent a considerable amount of time wondering which one Sansho actually was. I knew he was a bad guy who tortured and mistreated the people he kept to work as slaves on his estate in the film's feudal Japan setting, but I could never be sure that the guy who turned out to be him was actually Sansho, and not some low-level functionary carrying out Sansho's cruel bidding. That's a problem in itself, when the movie is named after the villain and you're not even sure which one the villain is. But even with a very charismatic villain, I still would find it weird for the movie to be named after him. Like, Star Wars would probably never have taken off if it had been called Darth Vader.

I'm sure Mizoguchi was not thinking about a franchise with action figures when he made Sansho. But I'm not entirely sure what he was thinking. This is a distressing, misanthropic film, in which even the eventual hero, Zushio (Yoshiaki Hanayagi), uses a hot iron poker to brand a poor elderly man who attempts to escape, and feels no compunction about it until much, much later. See, Zushio and his sister, Anju (Kyoko Kagawa), were overcome by bandits when they were fleeing the city where their father, a politician, was facing an uprising, endangering their lives. They were separated from their mother, who was sold by these bandits into prostitution, while they were sold to Sansho. The branding is his attempt to fit in and comply with Sansho's agenda, in order to prosper in this glorified prison camp. Nothing gets any happier from here, or at any point in this movie.

I didn't know how I was supposed to feel about this movie. The characters never connected with me, even though tragic things happen to them and Anju at least is very sympathetic. (So is their mother, but we see less of her.) The tragedies that befall these characters are perverse enough that I felt like Mizoguchi was just trying to punish us. I'm not averse to films with tragic outcomes, and I really don't think that even requires clarification. But the tragedy has to speak to a higher purpose and reveal what I consider to be profound truths about the human condition, and for me, Sansho did not.

Part of the strangeness of this film comes down to what they do with the character of Zushio. We understand that he has sold his soul in order to avoid more grave threats to his person -- that he has made the kind of adaptation people make in order not to get raped repeatedly in prison, for example. Call me old-fashioned, but I like my heroes to have a little more moral fiber than that. His sister is the one with the moral fiber, and she only belatedly convinces him to seek to improve their circumstances by attempting to escape and plead their cause to the ruler of a local prefecture, who may be able to improve their condition. Indeed he does do this, and when his powerful parentage is revealed to this local leader, the leader puts Zushio into a position of power where he has direct influence over Sansho and his abusive regime. Zushio doesn't feel like he's earned this, and the gestures the film has him make toward profound self-examination feel empty. As he has no trouble escaping, Zushio doesn't risk anything, not really. And his sister, the morally pure of the two, comes to far worse ends.

At least part of Mizoguchi's purpose in making this film seems to be illustrate the colossal unfairness of life. The better person you are, the worse it is for you. I get it, but I don't see why this film constitutes a particularly useful examination of that idea. Particularly since the fate of the film's two primary female characters is basically unspeakably horrible. Gender politics were quite different both at the time it was made and particularly during the period it was depicting, but there almost seems something sadistic in Mizoguchi's approach to these women.

Some of my problems with the story would be mitigated by interesting technique, had their been some, but I don't recall finding anything memorable in Mizoguchi's methods. It looks reasonably lush for its time, I suppose, but there was nothing in particular I felt inclined to point to afterward. With this film being as praised as it is, it seems there should be something either technically groundbreaking or transcendent in the story or themes. I found neither.

And yet even though I've spent the lion's share of this post telling you how I did not particularly like this movie -- singling out nary a thing I found distinctive about it -- I still gave Sansho the Bailiff three stars on Letterboxd.

Because I'm a pussy.

I suppose that's not a great word to use in a piece where I'm criticizing someone else's portrayal of gender politics. But I need a strong, weighted word to rake myself over the coals for my lack of conviction in my own perspective. When the merits of a classic film elude me, I've got a bad tendency to assume it must be a "me problem." So many other people can't be wrong, can they? So in deference to its classic status, I often find I can give a film no worse than three stars. And so three stars is what Sansho received.

What will July's movie receive? Remains to be seen. Also remains to be seen where we go. Been having a very hard time getting my hands on movies that were not made in either Japan or greater China, but am going to really try for Thailand or Indonesia in July. Wish me luck.
Posted by Derek Armstrong at 8:27 AM